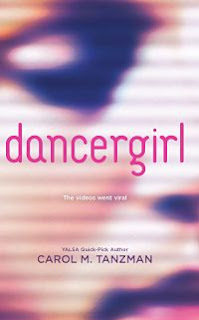 dancergirl (HarlequinTeen)
Ali Ruffino loves to dance.
When her friend posts videos of her online and they go viral, she thinks her unexpected fame might propel her straight to center stage. But along with some real admirers she gets some nasty detractors—and a stalker who isn't content to watch from afar.


I’m thrilled to be part of AD3NALIN3 with nine other fantastic YA/MG writers. For my first post, I’d like to talk about…thrillers. Specifically, contemporary thrillers. That’s the genre that dancergirl, my shiny (literally – the cover glows), newly published novel falls into!


Unlike a mystery, in which the whole point is to figure out “whodunit”¬¬, a thriller is more like a ride on a roller coaster. The reader experiences the unbearable suspense of being with the main character as he––or she––encounters increasingly dangerous, and difficult, challenges. It all leads to a chilling face-off with the “villain.”


In a mystery, the reader has the intellectual challenge of trying to figure out the puzzle. In a thriller, it’s not necessarily about who the villain is but how that person and his or her actions affect the heroine both physically and emotionally. We bite our nails as the main character falls prey to some not very nice people, dodging danger all the while. The building terror, constant tension, and fight for survival are the elements that drive a thriller.


It’s the chilling, very real story of something that could happen to you–– or any one of your friends. That’s what makes dancergirl a contemporary thriller—and what keeps readers turning the pages to find out what happens next!
Posted by Jordan Dane at 7:29 PM