I’m not a gambler.

I’ve bought lottery tickets a few times in my life and never remember to check the winning numbers. For all I know, I could be living in a Powerball mansion right now. Bummer.

Whenever someone holds a 50-50 raffle during halftime or intermission, I might buy a chance, but I consider it a charitable contribution because chances are I’ll be on the long line for the ladies’ room when they call the winner.

I’ve been to Vegas twice, once to celebrate my fortieth birthday, and once the following year on a book tour after I wrote a novel set in Vegas just so that I'd have an excuse to go back. It was pretty cool to see my name on the marquee along the Strip... 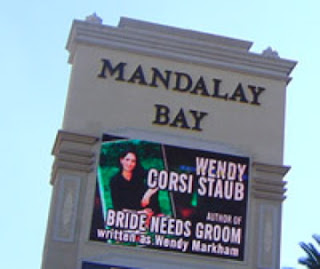 And of course, I’m passionate for hotel pools, buffets, and shows. Who isn't?
But the casinos aren’t very appealing to me. On my first visit, after playing the slots for ten minutes, I walked away several hundred dollars richer with no temptation whatsoever to continue playing, perhaps losing it all on the slim chance that I could win more.

I sold my first book because I took a risk, betting I would somehow win against tremendous odds.

See, I didn’t just intend, when I set out to become an author, to publish a book. I wanted to publish a novel. Not just one. Many novels. I planned to make a living as a novelist. Not just any novelist. I had my sights set on the New York Times bestseller list from the time I was a teenager working part-time in The Book Nook, our local indy bookstore.

It was my job, every weekend, to pluck the fortunate few titles that had made the venerable list for the upcoming week and arrange them according to rank in a special display. I vowed, back then, that one day my own titles would be among them.

There are roughly 200,000 books published every year in the US. Many are self-published, or nonfiction, or from small presses. Fewer than 1% of those will achieve bestseller status.

Generally speaking, the five major US publishers are responsible for the vast majority of bestsellers. Precise statistics are hard to come by, but those publishers receive thousands of submissions each year and publish perhaps a few hundred. Of that percentage, how many are first-time novelists? It’s hard to say, but having been an editor (back in the ‘80s at a publishing house that’s still around and falls into the top 10, though not top 5, US Publishers), I would guess that number is in the double digits at most.

I was blessed to have a mother who wholeheartedly believed in me from the moment I was born. When I decided, in third grade, that I wanted to become an author, she supported my dream in every way. When I later amended my goal to "New York Times Bestselling Novelist,"well aware that the odds of achieving that status were staggeringly slim, she shrugged and said, “So? Someone has to be in that tiny percentage. It might as well be you.”

My mom said the same thing years later, when she was diagnosed with breast cancer on the very day she turned 56. At that point, her odds of survival were pretty good—nowhere near as slim as the publishing odds--and for awhile, she appeared to have beat them. Even when the cancer spread to her bones a few years later, the odds were…well, not good. But not devastating. Not yet. "So? Someone has to be in that tiny percentage," she said. "It might as well be me."

I’ll never forget the day—again, ironically, on my mom’s birthday, her 63rd —that her oncologist informed us that she was going to lose. The chances that she could survive were almost nonexistent.

By that time, I’d been an author for fifteen years, with multiple New York Times bestsellers under my belt. I believed in beating tremendous odds, and so did my mother. We agreed, again, that someone had to be in that tiny fraction of a percent. Why not her?

Tragically, that story does not have a happy ending. Losing my mother just a few weeks later, the day after Mother’s Day, derailed me in a way that I couldn’t have anticipated. I was strong. I had always been strong. I was the oldest child of two oldest children; my parents had taught me that I could call upon inner strength that would allow me to do whatever needed to be done under any circumstances.

I was holding my mother's hand when she passed, and though it had been inevitable for days, somehow, it caught me off-guard.

Did I fall apart? Not right away. Not visibly.

Stay strong, I thought, and so I filled out the paperwork when the funeral directors came to the door in the wee hours in their somber suits, and watched them carry her away. I comforted my father, broke the news to my young children, picking up my seven-year-old when he collapsed on the floor in grief; I got through the wake and funeral, served food and cleaned up after the hordes of grieving friends and family members who filled my childhood home for a week.

Then I returned to my own home, to my life as wife and mother. To my writing career that had been on hold for weeks, when I couldn’t technically spare the time away. I have released anywhere from 3-8 novels per year, simultaneously under contract with several different publishers, since my career began. That particular year, the deadlines were stacked up, as usual, like circling planes preparing to land with precision timing at JFK. I couldn’t afford to miss any—doing so would mean they’d all go down, one after another.

Fortunately, my career didn’t crash and burn. Given my track record, my publishers were able to bear with me. Eventually I got the books in. I got my career back on track. I was able to believe in myself again—and even believe again in beating the odds, career-wise. How I did that is another story, and one I’ll share with you sometime.

Meanwhile, two years after my mom died, I was the featured speaker at a writer’s conference. I had been told that my mission should be to inspire the audience to take a chance on getting a first novel published. I told them the story of how I had beaten the odds, with my mother’s support—and how she hadn’t. I was so choked up by the time I finished the speech that I was wiping my eyes with a napkin, and so were many people in the room. Had I inspired them, or just made them cry?

Afterward, a woman, a total stranger, came up to me and told me she had just been diagnosed with an aggressive cancer. The doctors said there was a possible treatment that would be incredibly grueling, and that her odds, even with the treatment, of surviving more than a few months were in the 1-2% range. She had been getting her affairs in order, not willing to put herself through that.

My speech had her rethinking that plan. We tearfully hugged and went our separate ways. She was never far from my thoughts, but I sadly gave up expecting to hear from her.

Two Christmases ago, out of the blue, I got an email with the subject line THANK YOU. Guess who it was from?

That’s right. The woman had gone ahead with the treatment—and she had survived. It had been a fierce battle, but she’d won.

The following summer, I was signing books at the jam-packed national RWA conference when she walked up to my table.

“I wanted to say thank you in person,” she said. “If it weren’t for your speech that day, I wouldn’t be here.”

We hugged and cried—yes, I know, I do seem to cry a lot, don't I?--and caused a big commotion. If you were in the vicinity of the “S” author row that day at RWA National, you probably witnessed it or heard about it.

The point is, someone is always going to be in that tiny percentage. There are no guarantees, but if you take a chance, it might be you.

Well, there is one guarantee: if you don’t take a chance, I guarantee, with 100% certainty, that it won’t be you.

So if you’re sitting out there thinking that you’d love to become a writer—or an astronaut, or an Oscar-winning actress, or a New York Yankee: you can safely bet that a few years from now, someone is going to be doing those things. Why not you?

Posted by Wendy Corsi Staub at 1:37 AM

Wonderful post Wendy, and yes, I am in tears. I lost a dear friend on Tuesday morning to colon cancer. She was just 50. She fought a good fight and when her oncologist chastised her for seeking even more aggressive treatment, she found a new oncologist. She wanted someone to help her live, not die. That was her choice. He Doctor at that time told her she only had 3 months. With the new Doctor, she had almost another year. It was a year to spend with her children, to travel with her husband, and yes, to live. Someone has to beat the odds. Thank you for this blog.

Thank you, Wendy, for continuing to share so much of yourself in the hopes of inspiring others to strive toward their dreams!

Oh, Cate, I wish I could give you a big hug. I'm so sorry for your tragic loss. There are so many lessons to be taken in the way your friend handled her illness. Please accept my sincere sympathy.

I just lost my brother-in-law to lung & bone cancer in Dec. He fought for a long year after being diagnosed & underwent treatments just to prolong his life, not save it. My husband's only brother.

I'd written ON A DARK WING, a story about a girl grieving the death of her mother after a fatal car accident, where she crosses the path of Death. I wanted to explore grief & Death for personal reasons, and hopefully give comfort to young readers in the process. Writing that book helped me deal with Michael's death in ways I never imagined at the time.

Thanks for another amazing post, Wendy. Gonna hug my mom now.

Thanks for sharing this story, Wendy. It brought me to tears. I needed to hear it, and I know someone else who needs to even more than me. I'm going to pass it on to him.

Brilliant post, Wendy. Inspirational in a way I didn't expect.

Thanks for sharing this, Wendy. What an amazing story.

Oh, Wendy, my eyes are brimming with tears right now. Such a beautiful and inspiring post! Your mom was an amazing woman! No wonder her daughter turned out to be so strong and successful. I'm so glad you got to see that lady again, and to know how your story and words had touched her. Bless you, my dear. :)

Thank you so much for all the kind comments here--and my heart goes out to those of you who mentioned that you have also experienced difficult losses.