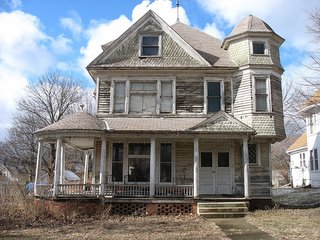 How does setting affect story? I've thought a lot about that question in relation to my own writing. Some writers write plot-driven books. I consider mine to be more “character-driven,” in that the plot is pushed forward more by the characters than by external events or the environment around them. That said, even in character-driven stories, setting plays a crucial role, as it does in any good novel. A vivid locale can create tone and atmosphere, thereby helping the reader immerse herself in the world of the book. You can’t build a sturdy house on a weak foundation, but build a strong foundation and the home will be solid. In the same sense, build a good setting and let your characters live and grow in it, and the book will be solid – or believable.

In a character-driven book, the setting may not drive what occurs, but in all likelihood it will affect the characters in some way, helping to drive them to push the plot forward. My novel Through Her Eyes would have been a very different kind of story if I had set it in New York City or Seattle instead of in a small Texas town. For one thing, the wind in the Texas Panhandle is very pervasive, adding to the eerie mood and atmosphere of the book. In fact, the wind plays with the main character's sanity to a certain extent and almost becomes a character in itself. Tansy knows that a ghost is rumored to haunt the property where she lives, so when the wind blows through the rafters of the old house, making the wood creak and groan, her imagination takes flight and she feels even more determined to solve the mystery surrounding the ghost so that she can put an end to her fears. That element of setting – the blustery West Texas wind – adds another layer to what drives Tansy to make the decisions she does.

I drew on my own experiences as a Texan to create the fictional town of Cedar Canyon in Through Her Eyes. The city of Amarillo, where I live, has a population of 175,000 but feels much smaller and it is surrounded by several little towns. While writing the book, I drove over to the towns of Canyon, Panhandle, and the scenic community of Canadian to do research that would help me imagine what life might be like in Cedar Canyon.  I was also able to call upon memories of the years I lived in the small town of Pampa, Texas, from the time I was in 5th grade through my sophomore year of high school.

But a town is more than its layout and landscape – a town is its people. West Texans tend to be outgoing and friendly, especially in the smaller communities. However, true to the stereotype of small towns everywhere, gossips are as common as Friday night football and news usually travels faster than the person creating it! I couldn’t set my story in Cedar Canyon, Texas – a town with a population under 10,000 – and make it seem believable  without including that aspect of small town life. Cedar Canyon is a tight community with shallow-grave secrets. Nobody is supposed to talk about their neighbors’ buried skeletons – and certainly no one would admit to it – but one doesn’t have to dig deep to reach the corpses!

I am a Texan, and Texans are very proud of their heritage. Although many “outsiders” consider Texas to be a southern state, we aren’t truly “the South.” And though it’s true our Western legacy is strong, we’re somewhat separated from the rest of the west. Our legacy is uniquely our own, and our often over-exuberant pride in it can be difficult to explain! My husband’s great-grandfather, grandfather, and father were all born in the Texas Panhandle, as were my husband and our children. That’s five generation of Archers born and raised right here where we still live. Many other families here have roots set just as deep -- 150 years or more of family members whose blood, sweat and tears nourish the soil; their ancestors are Texas’s heritage and history. When people from New York City are asked where they live, they say "New York City." But ask a Texan where they live and they won’t answer with the name of a town or a city, they’ll tell you they live in Texas! As you might imagine, this sort of mindset among the residents of fictional Cedar Canyon, Texas in Through Her Eyes makes it all the more difficult for someone like Tansy – an outsider – to find her place and fit in among the “natives.”
Posted by Jennifer Archer at 1:30 AM

Email ThisBlogThis!Share to TwitterShare to FacebookShare to Pinterest
Labels: author craft, Jennifer Archer, setting, setting as character, Through Her Eyes