One of my favorite things about being a writer is meeting other writers. I love to see the way their minds work: what gives them the idea for a story, how they go about researching and plotting, what their writing process is. I always come away feeling like I've learned something about myself and my process just by sharing theirs.

It's also true that I'm a huge fan of historical fiction, romance, and ghost stories which is why I wrote a gothic/literary YA set in Victorian England with a unique love triangle between a deaf heroine, a gypsy viscount, and a ghost ... sort of Jane Eyre meets A Certain Slant of Light. I'm hoping to pique my editor's interest in this story, tenatively titled GhostFlower, when I pitch second book ideas to her this week.


All that to say, when I met the lovely and talented Cat Winters (the brilliant mind behind The Suburban Vampire blog), whose historical ghost YA will be published through Amulet in Spring 2013, I knew I couldn't wait to pick her brain for details.  She graciously accepted my invitation to drop by today and give us the inside scoop.
Please welcome Cat, and her debut novel In the Shadow of Blackbirds to the ADR3NALIN3 stage. 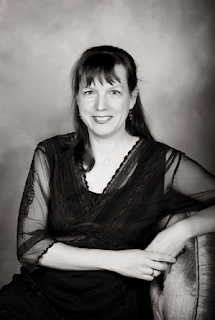 Cat Winters was born and raised just a short drive down the freeway from Disneyland, which probably explains her obsession with haunted mansions, bygone eras, and fantasylands. Her debut novel, In the Shadow of Blackbirds, a YA historical ghost tale illustrated with early-twentieth-century photographs, is coming Spring 2013 from Amulet Books. She lives outside of Portland, Oregon, with her husband and two kids.

I suppose I've been preparing to write my upcoming novel, In the Shadow of Blackbirds, since I first fell in love with ghost stories. My fascination with spirits started way back in elementary school, when a book about haunted locales called to me from a shelf in my school's library. Up until that point, I had only thought of ghosts as fictional creatures that showed up in spooky stories and movies, and because I was growing up in Orange County, California, not far from Disneyland, I thought they looked something like this:
Yet here was a book telling me that real people believed in real ghosts.
After I read that library text, I found myself continually drawn to spine-chilling tales. One of my favorite movies growing up was The Watcher in the Woods—another one of Disney's contributions to my obsession with all things eerie. The movie is packed with menacing music and so many psychological thrills that both my sister and my daughter refuse to even talk about the film.
Here's the trailer so you can see what appealed to little horror-loving me:
I spent my teen years gobbling up classic Gothic literature (Shelley, Poe, the Brontës, etc.) and watching The Twilight Zone reruns and old Alfred Hitchcock films. Then, in my adulthood, I stumbled upon the history of séances in a Smithsonian Magazine article and started playing around with a historical novel involving séances. That particular book didn't go far, but several years later I landed an agent and chatted with her about an entirely new take on my basic plot ideas. I proposed showing a teen's perspective of the Spiritualism craze that resulted from the horrors of WWI.
One year later, I turned in the first draft of In the Shadow of Blackbirds. A year after that, I received an offer from Amulet Books.
In the Shadow of Blackbirds explores the nightmare world of 1918, when both WWI and the Spanish Influenza killed millions of people around the globe, and desperate Americans turned to séances, spirit photographers, and folk remedies for comfort.
To research the ghostly side of the story, I pored over spirit photographs from the era and read books that tackled the dark and dangerous aspects of spirit communication, like Harry Houdini's A Magician among the Spirits and Mary Roach's Spook.
I've always felt some of the most moving tales about war and other atrocities are the ones told from the point of view of young people, so I picked a brutally honest sixteen-year-old girl to be my protagonist. She's forced to deal with death, spiritual tricksters, national paranoia, some highly creepy birds … and a ghost (of course).
Would the kid in me who loved to be scared out of her wits enjoy this novel? Definitely.
What about you? Are you typically drawn to ghostly tales? And do you believe in ghosts?
***
﻿
Want to keep tabs on Cat and her upcoming novel? Check out her online haunts:

Welcome, Cat!! And thanks, Anita, for introducing us to a new author. I LOVE ghost stories. Can't wait to read your book too. I've been on ghost hunts before & love the adr3nalin3 rush. Anne Rice's LASHER was a fav read of mine, probably the first time I ever fell in love with a ghost. Jennifer Archer's THROUGH HER EYES was another book I loved. Felt like a cougar over Henry. Ha!

Congratulations on your book, Cat, and I'm glad you included our blog in the celebration of your accomplishment. I hope you'll be back after your release, maybe on a virtual book tour.

Haha, Jordan! You were crushing on Henry, too, huh? What is w/us and bad boys. Hmm.

Cat, thanks so much for hanging out here today! I really enjoyed seeing how you developed into the writer you are today. And seeing some of those Disney videos brought back memories for me, too.

Anita, thanks for introducing us to Cat! I am now on pins an needles waiting for her book. Of course, you know I love ghost stories seeing as how I wrote THROUGH HER EYES! I also have a thing for birds. They can be eerie or peaceful. I also really love that Cat's novel is historical. It's good to know that editors are buying YA historical fiction since I have an idea up my sleeve for one!

Thanks for the warm welcome everyone!! I realized I forgot to mention my wonderful agent's name in the post: I'm with Barbara Poelle of the Irene Goodman Literary Agency, and she fully encourages me to embrace my dark side.

Jordan: I've been on ghost hunts, too, and I absolutely love them. My favorite was a ghost/vampire tour in New Orleans.

Anita: Thanks so much for hosting me over here! You're welcome to chat at my site at any time.

Jennifer: Historicals are still a tough sell, but it is possible. I'm glad to hear you have a thing for birds. They play a huge role in my novel...but I won't say how until later...

Ooooh, The Watcher in the Woods! That was one of my favorites. Bette Davis bringing the chills! Your book looks great-- I love the premise. Will be on lookout. Congratulations!

I'm thrilled to find I'm not the only one who loved THE WATCHER IN THE WOODS, Adele! As I said in the post, I can't even mention the title of the movie to my sister or my 12-year-old daughter without freaking them out. Such good, eerie fun!

By the way, I loved your own take on ghosts and Spiritualism in PICTURE THE DEAD, a book that's right up my creepy little alley.