Carol Tanzman checking in. Today, I'm excited to introduce you to my awesome friend Leigh Purtill. Leigh is truly multi-talented. Both a YA writer and a ballet teacher/choreographer, she's choreographing the absolutely fun Zombie Ballet. You can see an excerpt in this first, decidedly low-tech book trailer for DANCERGIRL. She was also a dance consultant for the book, making sure that the dance combinations I described were actually danceable!

I’m not addicted.  I can quit anytime I want to.

A few years ago, when my first two novels, LOVE, MEG and ALL ABOUT VEE were published, bloggers and readers would often ask me the same question: “Do you have any advice for aspiring writers?”

Without fail, I would respond: “Just finish it.” Finish the first draft, don’t worry about how messy it is, and then rewrite.  For years, that was just about the only piece of advice I had to offer anyone.  I can’t tell you what to write about or how to write it, but I can suggest you do that one thing.  Finish the darn thing.  Only then can you go back and start the real work, which is rewriting.

But now, I can offer a second bit of wisdom: “Unplug yourself.” Close your browser, turn off the wireless, and shut out the noise of the ‘Net. Well, finish reading this blog first and then close it all up. Sounds simple enough but it’s hard - harder even than finishing that first draft. But if you don’t, you won’t.  That’s even more simple.

When I first began writing novels, I was working a full-time job (I watched television for a living so it was a cool job but still, full-time is full-time).  I didn’t have a laptop computer so on my lunch hours, I would write in a steno pad that I could carry to a park bench or a bus stop or anywhere I could find an empty seat.  I’d scribble for an hour each day, five days a week, and then on the weekends, I’d sift through my horrible chicken scratch and type it all up.  That worked really well for me for seven years.  Then I left that TV job and began working as a ballet instructor which gave me a far different schedule.

It also gave me the opportunity to write indoors on my laptop.  So very close to my internet. As writers, we do a lot of research so naturally, I would keep the ‘Net open behind my document so I could quickly look things up (what’s the street value of a prescription drug? What’s an overdose look like? And more fun, lighthearted things like that.). But I have a hyperlink habit. I see blue-highlighted hypertext and I can’t help but click on it.  One click leads to another and another and soon, I’m at Huffington Post laughing at cat videos.

I continued to write, of course, and getting my words per day regularly. But I never realized what writing in bits and pieces was doing to my story until I didn’t have internet access.  I was down for over a week, with very limited ability to get to email and Facebook.  This left me with big chunks of time to just write.  I finished my draft in days.  Thousands of words flowed out of me; I never once stopped because I had to look something up.  I just kept on writing. Before the week was up, the draft was done.

And then I discovered the second best thing about no ‘Net access: the work itself was more cogent.  I felt more in touch with the material and I could see connections between characters and plot points that I hadn’t seen before because I was always writing a few words or a sentence at a time. Because I had been getting my word count each day and was progressing enough to give my writers’ group pages regularly, I believed I was actually writing. When I stopped internetting, though, that’s when it all started to make sense.

Some addiction experts say that when you are serious about quitting something - like smoking or eating a bag of Fritos in the middle of the night - you should tell people.  That’s exactly what I did.  I told my friends how much cutting out the internet helped me finish my draft (and finish this blog post, too) and asked them to remind me if I began complaining that I was behind on my work.  They are free to use profanity if necessary to get me back on track.

HINT: If, like me, you find yourself constantly “needing” to do research, keep a list of what you need by the side of your computer.  Jot down, “Find ‘R’ name for brother character.” And, “Miles from Alaska to Seattle.” Use placeholders for the missing details and then when you’re finished for the day, spend some with Google.  Just keep the flow going.

So my draft is done and it’s about addiction, ironically enough.  It’s got a touch of the supernatural, too, and some ghosts.  I have to rewrite, of course, and when I do, I’ll be unplugged.

Remember: Friends don’t let friends hyperlink.  But before you unplug, check out my website: www.leighpurtill.com.

FAT GIRLS IN LA is the story of Veronica May, a plus-size actress with plus-size talent who moves to Los Angeles to become a star.  But in LA, no one notices Vee's talent, only her size. Can she stay true to herself and navigate Hollywood on her own terms? Or will success and love elude her? (First in a trilogy.)

After a dozen years in the film and television industry, Leigh Purtill left the business to write and teach ballet in Los Angeles. Her first two YA novels, LOVE, MEG and ALL ABOUT VEE were published by Penguin/Razorbill.  She is independently re-releasing her novels along with a slate of brand new books. When she's not creating, she's bored. 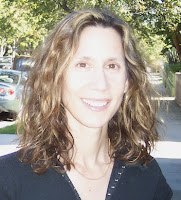 Posted by Carol Tanzman at 3:00 AM

Wow,
All I can say is Wow.
You're so right, Leigh, and thanks for your insight.
I have an internet addiction too, and you know what, my writing is suffering because of it.

When I wrote my first two novels I wasn't connected. They flowed. They came from a space of undiluted "me", and I finished the first drafts in under three months.
Then I got my laptop all set up, and the rest is history.

I'm feeling a strong sense of irony that I'm commenting online to your post on UNPLUGGING. But you are so right on both--Finish it & Unplug. Thanks for being our guest. Welcome.

I agree. The irony factor does not go unnoticed. Many times I shut off the Internet when I'm writing so I can't even check email, or twitter, until I take a break. Thanks so much for being a guest!

Paula, exactly! My first novel was, in fact, Fat Girls in LA - but it was 800 pages long (a plus-size novel!) and I just wrote and wrote and wrote til I reached the end. That flow cannot be achieved in bits and pieces. You probably *need* the break!!

Jordan and Carol - I know! And here I am too! There are programs which will shut off your internet for a certain length of time and the only way to get on is to reboot. So that's another option if you can't do it on your own. Good luck getting out~

Thanks for having me here!!

This is me, ignoring all of you. I'm writing.

I am SO addicted and I SO want to unplug. Checking email, etc., intermittently while working on a book has really impacted my writing in a negative way. You've inspired me, Leigh! Thanks.

Glad to hear it, Jennifer! I'm starting my rewrite now and when I go into the other room (which has no net access), it's amazing how suddenly I can actually think straight.

This is BRILLIANT advice. I didn't need it for my first several books, but I sure need it now. I've become a bit of a surf fanatic myself due to twitter, blogging, and trying to promote my upcoming debut. So this was exactly what I needed to hear. Thank you! Now, I'm getting off the internet to write for the evening.:)

Btw, Paula, Jordan, Carol, Jennifer, and Anita- I was surfing around all of your websites and found such good stuff. After all, if I'm going to be online, I might as well spend my time wisely. :) More great books for my TBR list!

Just for the record - this morning I did it! I sat down and unplugged the wireless before I surfed, and what do you know, 1000 words jumped right out of my head and onto my WIP!

Reminds me of a button I saw on tumblr - writing is 3% inspiration and 97% staying off the internet.