Blood, Ghosts, and Boo Hags: Write What You Know

People often ask me how I got the idea for the Magnolia League, a dark comedy about Savannah, Hoodoo Magic, the Underworld and death.
“Possessed debutantes?" they say. "Blood curses? Plat eyes? Slip skin hags? You look so normal…What's up with that, sister?”
I grew up in Charleston, South Carolina, where Hoodoo and ghosts are taken as seriously as mint julep recipes and whether or not your ancestors fought on the "noble" side of the Civil War.  I know a lot about ghosts, because we had one in our house. 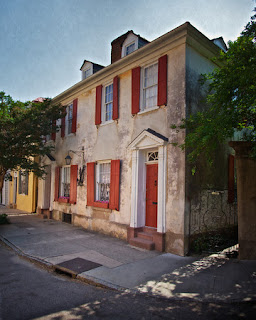 After selling, the newly exiled owner of the rambling house I grew up in shot himself in the our bathroom the night before my Mom and Dad were supposed to move in. He didn’t want to give up his ancestral home, so he didn’t. You can believe me or you don’t have to, but that house was as haunted as a cracked mausoleum in New Orleans. If you’ve ever been there, you know that I mean a whole lot.
Out ghost’s presence did not alarm us too much. Charleston is full of ghosts, so it was all normal. He rearranged our shoes, and touched my father’s shoulder sometimes. Once he managed to produce a dark chill in the living room so sudden that my best friend from high school ran screaming to her car. It was actually quite impressive.
Henrietta, our housekeeper, kept a close eye on spirits. She was from a South Carolina Gullah family, which meant she subscribed to certain beliefs and practices derived directly from Africa. We were never to leave hair in our combs and brushes; instead we were to bury the old strands in the yard so spirits couldn’t hang onto us and make trouble. She instructed us daily to clean lint off our carpets, because, she said, dust and lint are what’s left of dead things. She also sang hymns once it became dark to keep evil at bay. 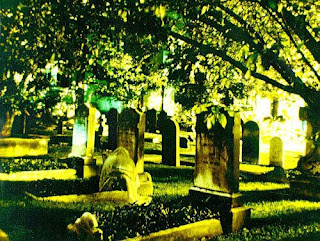 Growing up with spirits as daily conversation, I took the special nature of our household for granted. I didn’t understand until I was older that everyone in the world didn’t put salt on the threshold in the morning to keep away boo hags (dead spirits looking to take your soul to the underworld) ; that putting a knife under the bed was not a medical practice for cutting pain. It wasn’t a matter of whether we believed these things or not; it was just that we lived with them, the same way we lived with the coffee can of bacon fat on the stove and bits of ham hock in our vegetables.
Henrietta died when I was fourteen. Her funeral at the A.M.E. Church on Calhoun Street was opulent and deafening. Strangers clung to my brother and I, handing us candies and pictures. When we went to the burial, family members passed babies over the grave, a practice to ensure a proper goodbye.  Mourners left flowers and chocolate and wine on her stone, so she would be satisfied and not come walking as a ghost to ask for more.
Has she come to look for me? Sure. I’ve seen her in dreams, the same way I used to see Mr. Barnes, the previous owner of our house. He had dark hair going to gray, and was thin, and wore fine shoes that shined. I’ve never seen him, I just know that. When you live with a ghost for a long time, you just know.
So that's why I write about spirits. They're in my blood. It sort of amazes me that it took me this long to get here.
Posted by katie at 1:00 AM

Awesome post, Katie! I LOVED "The Magnolia League" and can't wait for "The White Glove War".

I act brave when I talk about ghosts, but I'd probably be the one who ran screaming. The thing I love, though, is how superstitions or beliefs add to the local color. That adds depth & richness to settings & makes for a great read.

O'Dell loves his ghost stories & had personal experiences with one at a haunted theatre that inspired his debut book, THE WEEPING, right O'Dell? Bwah ha HAAAA!

Well, now I have to read your book because I write about ghosts, too. And Charleston. And boo hags. And rootworking. And Gullah superstitions. We're practically sisters! :)