You know, I was going to post today on the utility of blog tours and why they may or may not be helpful; what to look for; what not to do.  But, you know, I decided to bag it for this week and tackle that next year.  The reason?  Simple: it’s getting onto Christmas, and I didn’t want my last blog post of the year for this site to be all about business.


Now, I’ve never celebrated Christmas; I’ve never had a Christmas tree.  That doesn’t mean that I haven’t hankered after one.  One thing you learn about growing up Jewish in the United States: you miss out on a really good time every Christmas.  When I was a kid, I really envied everyone else who got to put up lights and Christmas trees and sing carols and have a good time and eat a lot of great food.  It wasn’t about the presents; I couldn’t care less about presents.  Okay, when I was a kid, maybe I did, but really . . . not so much.  (I do remember that, like almost all Jewish kids’ parents, mine tried to make up for it by doing the whole Chanukah bit with the presents.  It’s all rather silly, too, because Chanukah is an extremely minor, minor, MINOR holiday.  Minor.  No amount of dreidel spinning and latke eating will change that, either.)


Christmas was a time that always reinforced how very different I was.  When I was growing up, I was frequently the only Jewish kid in my class (heck, in a couple cases, the entire bloody school).  Part of this is because I grew up in the South and, because my dad was in the military, we moved around a lot.  There just weren’t many other Jewish kids around.  Believe me, there is nothing suckier than being trotted out on stage to sing “I Had A Little Dreidel” for your second-grade class’s holiday concert.  I wish I could say that I embraced my uniqueness, but come on, I was eight.  I wanted a tree and pretty lights.  I wanted to sing Christmas carols without guilt.  I think that, most of all, I wanted to belong because, when you’re a kid, there is nothing more important than belonging.  You don’t want to be different.  It’s like that song from “A Chorus Line”: "Diff'rent" is nice, but it sure isn't pretty. "Pretty" is what it's about. I never met anyone who was "diff'rent" who couldn't figure that out.”

Fast-forward forty some-odd years: do I have a tree?  No.  Do I have lights?  No.  Do I still sort of want them?  Yes, I do—and dang it, if I’m still not the only Jewish kid in town.  (Okay, there’s the husband; so I guess that’s two of us.  I haven't forced the cats to convert.)  I’ve even gone so far as to collect the odd Christmas tree ornament now and then while telling myself that, well, they’re collectibles. 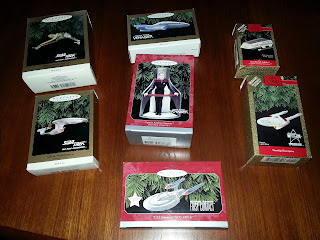 The problem is that for me a Christmas tree would symbolize my envy, my desire to belong, and—most of all—my wish not to be different.  I think those are all the wrong reasons to appropriate a symbol that has very special meaning to a lot of people.


Do I still have problems with being different?  Sure.  There’s always a split second when someone says, “Merry Christmas” when I wonder if I should say something, like, yo, I’m Jewish.  But that would be rude.  (I don’t have the same problem when people come to my door with pamphlets.  There’s a mezuzah right there, guys.  Like, catch a clue.  On the other hand, it’s a little ironic that in the one instance where I’m not treated as different—when someone doesn’t recognize that I’m unique and not like them—I get all ticked that they haven’t noticed.)


But I have reached a kind of state of grace about the whole thing.  This isn’t my holiday; it really can’t ever be, and no amount of trappings will change that.  (My husband and I even do the very traditional Jewish thing on Christmas Day: Chinese and a movie.)  I can enjoy bits and pieces, like listen to Christmas music because it’s fun and different and only comes round once a year. And, as I said to someone recently, half of the greatest choral music in the world was written for the Church and in celebration of a religion of which I’m not a part-- and yet, it is wonderful music to sing.  The symphony chorus just did Handel’s “Messiah,” and I would be a fool to pass up the chance to sing something that glorious.


Mostly, though, I hope you’all really enjoy your holiday and this time of year.  You are all more fortunate than you know.

I was in a choir that sang Handel's Messiah. I got recruited out of the larger alto section to sing tenor. We were few but sang as if we were many. Great fun to be a part of something like that. It can make the hair on the back of your neck stand on end.

hey, I've known many an alto rescue those tenors. ;-)

Thanks, and enjoy your holiday, Jordan :-)

What a fine post and good to remember when I feel overwhelmed by the trappings of Christmas. There should be joy. Too often it has become a merchant's holiday.