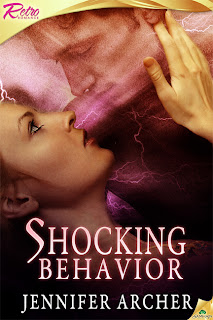 Writing for both the young adult market and the adult market is enough to make me feel schizophrenic sometimes! Next week on the very same day -- September 18 -- I have two books being released. My novel for teens, Through Her Eyes, will be available for the first time in paperback, and my Romance novel, Shocking Behavior, will be available for the first time as an e-book -- with a brand new cover. 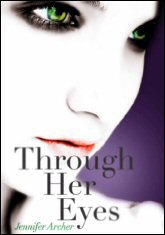 Writers are often advised by agents and editors to develop a "brand" by focusing on one genre. While I know this is good career advice, I've always had trouble following it. I can't force a story -- I have to write the one that's knocking around in my head, trying to get out. Over the years, those stories have included paranormal romantic comedies like Shocking Behavior, quirky mainstream women's fiction, more serious mainstream women's fiction, and teen fiction like Through Her Eyes.

I used to spend a fair amount of time wondering why my books are so different, one from the other. I asked myself if I was too easily bored with writing the same "type" of story. Or if I was allowing myself to be influenced by whatever I was reading at the moment.  (I'm an eclectic reader -- I don't stick to one genre in that regard, either.)

It wasn't until my agent pointed out that all of the books I've written have one thing in common --    a "continuity of voice" -- that I took a closer look at my body of work. When I did, I made a surprising discovery. My books have more than one common denominator. I revisit the same themes in my stories, again and again.

For instance, more than one of my books have a past story and a present story taking place simultaneously. In these, history catches up to the here and now and affects it in some profound way. And many of my characters wear masks, literally or figuratively or both. These characters hide behind or inhabit a false persona or pretend to be someone else. Sometimes another character in the story falls in love with the "disguised" person's soul or personality -- their inside -- before seeing what they look like physically -- their outside.

All of these things are true of both Through Her Eyes and Shocking Behavior. On the surface these stories seem to be completely different. Through Her Eyes is a novel for young adults, a ghost story that deals with serious issues such as illness and death and dealing with change. Shocking Behavior is a novel for adults, a paranormal romantic comedy about a man who becomes invisible after stumbling upon his kooky scientist father's latest invention.  Through Her Eyes is serious with moments of humor.  Shocking Behavior is humorous with a subtle, serious undertone. However, look closer and the similarities are there. The ghost and the invisible man. The girl/woman who falls for each without ever really seeing him. A historical story that affects the present day story. The illness of a loved one and the changes that brings.

Follow any author's work and I predict you'll find that I'm not unique. Every writer has his or her own themes that they explore in their writing, again and again.

How about you? If you're a writer, do you recognize recurring themes in your stories? And readers, can you identify the repeating themes of your favorite authors?

Every ghost has a story to tell . . .
The last thing Tansy Piper wanted was to move to the middle of nowhere in Cedar Canyon, Texas. Once there, her life takes a chilling turn when she finds a pocket watch, a journal of poetry, and a tiny crystal in the cellar of her new home.
The items belonged to Henry, a troubled teenager who lived in the house and died decades earlier. And Tansy, an amateur photographer, soon discovers that through the crystal and her photographs, she can become part of Henry's surreal black-and-white world.
But the more time Tansy spends in the past, the more her present world fades away. Can she escape Henry's dangerous reality before losing touch with her own life forever?


When J.T. Drake is rendered invisible by one of his elderly father’s inventions, his father’s assistant Roselyn Peabody is the only person with the skills to possibly make him normal again. The beautiful, young scientist has never met J.T. and has no idea what he looks like, yet sparks fly whenever they touch. Rosy vows to help him regain his visibility, but when J.T. finally materializes, will their electric chemistry disappear or expose itself as true love?
Jennifer Archer's website www.jenniferarcher.com
Posted by Jennifer Archer at 4:00 AM

Great blog post, Jennifer! I've noticed a few trends in my own writing. Glad I'm not the only one. ;)

I definitely gravitate toward several themes. They are more apparent in my YA books. I really prefer writing the story, then seeing what themes I can mine from the pages. Nice post, Jenny.

Le and Jordan, it's interesting when they reveal themselves, isn't it? I'm like you, Jordan. I never intentionally write to a theme. Yet I instinctively return to the same ones repeatedly.