So What is Steampunk Anyway?

So What is Steampunk Anyway?

Two weeks ago I was at a Steampunk con in Portland ,OR called GEARcon. There were a lot of people dressed up in very authentic late Victorian costumes with a twist. 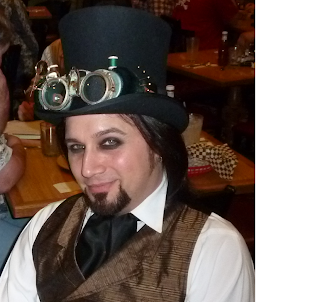 And that twist is where the punk in Steam punk comes from. I was there because my debut novel The Peculiars has a whiff of Steampunk to it. Maybe more than a whiff. I’d call it Steampunk light, but more about that later.

During the con I was on a panel of twelve authors, the panel was unmoderated and twelve is definitely too many authors for maybe even a moderated panel, but some interesting questions came up. What exactly is Steampunk anyway? How does it fit in with the latest dystopian craze?

So here’s my best attempt at answering, based on my thoughts about Steampunk combined with what the other authors shared. My favorite definition of Steampunk is: alternate history and fantasy with a side of sci-fi. Think about the industrial revolution. We were on the edge of wonder, Darwin was new, science was going to save us and steam was the emerging technology. A pretty optimistic view of the world. Now picture steam power being the future technology of choice. Think steam powered typewriters, computers, air travel, technology that never really existed in the mid to late 1880’s. Some authors spend a great deal of time on the technology, but for me, the technology takes a back seat to character and atmosphere. I also wanted the real 1888 to bleed through into my story. And I think it does. Even if I did add goblins. So, the Steampunk world takes the Victorian world and adds a twist, turns it sideways while still keeping the Victorian style and ambience. Remember the old Wild Wild West show? Or think Golden Compass. 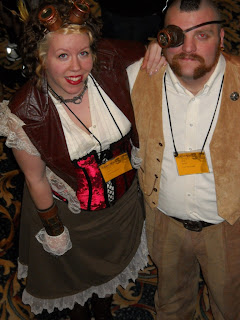 The views were split on the panel about whether or not Steampunk is hopeful. Some authors create a dark dystopian steampunk future. After current technology is gone, we return to steam. I like to think of it as a time when we were on the brink of exploration, a time ripe with possibility. And it was promising until the government started spreading rumors of Peculiars and sending anyone who looked different into exile to work the coal mines of Scree. Oh, wait, that’s just my book… 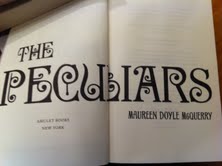 Posted by Maureen McQuerry at 9:23 AM

That's a question that bothers me, as steam power was a used and viable power in the Victorian age. Most Steampunk stuff I've seen is "Victorian + Gears - Fashion and Gender Restrictions". I think it's also more of a pulp than a punk, and more Victoriana than anything else (I rarely see Steampunk inspired in any other era, though I long for some Regency Steampunk, or French Revolution Steampunk)

Loved your definition and all the pictures are so fun. I never would have thought that perhaps FIREFLY would be consider a Sci-Fi version of Steampunk? What do you think? They're tempermental spacecraft could be construed as a "gear," although not with steam.

I think of Steampunk, I think Jules Vern, man vs machine kind of thing with a historical component, but there are so many variations of this subgenre as an alternate telling of history that it's truly amazing.

So Beth--why not take a Regency or French Revolution spin with a version of this?

I need some cool goggles!

I have a collection of weird hats that I've collected over the years--that I wear when I write--some with glitter, or antennae, or that flash lights. Why not a top hat and goggles?

Yes, Jordan. I'd definitely put Firefly in the Steampunk category! And Beth, your comment is one of things we discussed on the panel. We also discussed what Steampunk might look like in other cultures. Indian SP? South American?

I also think that the new Sherlock Holmes movies w/Robert Downey have a "whiff" of steam punk to them. It's one of the things that draws me to that series.

Welcome to ADR3NALIN3, Maureen! Nice to have you aboard. :)