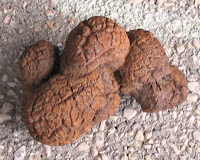 As part of Thrillerfest one year, they gave a special award (if a piece of fossilized poop can be considered an award) to our very own John Gilstrap (even though he's no longer officially part of this blog, he'll always be the Friday guy to me). The award was for the Worst Amazon Review, and he won for this little nugget (no pun intended): "The glue boogers in the binding were more captivating than Gilstrap's torpid prose."

I know this is going to sound counter-intuitive, and for many authors, nearly impossible, but here's my advice: don't read your reviews, ever. Turn off that Google alert. Skip the Amazon reviews section. Ignore your GoodReads ratings. And if you must know what a blogger or traditional media reviewer is saying about your book, enlist someone you trust to skim the contents and give you the highlights.

This applies not only to negative reviews, but positive ones. Because here's the thing. As we all know, a reader's opinion of a book is enormously subjective. The way they approach a story can vary at different points in their lives, or even their day. They read things into it that you might never have intended--and they're all going to have vastly different opinions about what worked and what didn't. I'm always startled when I get feedback from beta readers--everyone always manages to come up with different favorite sections, and least favorites. So when taking their advice, I usually try to find the commonalities, the issues everyone zeroed in on. In the end, much of what they say is taken with a serious grain of salt.

The same applies to reviewers, naturally. Maybe Marilyn Stasio ate a bad oyster before reading your book, and the nausea she felt skewed her experience. Maybe the Kirkus reviewer was going through a divorce, so the way that you depicted a couple falling apart resonated too strongly with him (or not strongly enough). I know that for my last book, several reviewers felt the plot was tremendous, but the character development was weak. Others loved the characters, but the story left them cold. When writing a review, even when you loved the book, there's an irresistible inclination to find something to pick at. That's what many of us were taught to do in school; otherwise it doesn't feel like we've done the review justice.

As writers, we already have enough voices in our heads. Resist the temptation to let new ones in. This is particularly critical if you're writing a series; if one reader hated your protagonist, do you really want that small seed of doubt planted in your head? Do you want to be swayed by Merlin57 if he declares that you should be the next winner of the fossilized poop award?

Even when a review is entirely positive, there are drawbacks. Say a particular reader took a shine to a relatively minor character, and hopes to see more of her in the next installment. Should that be factored into your writing process? I say no, not if that wasn't part of your initial vision for the narrative.

It's a challenge not to dive into the fray--especially since, with all the blogs out there, there are potentially dozens of opinions on your prose just waiting to be perused. But avoid the temptation; don't dive into the rabbit hole. If your book is amassing lots of great reviews and accolades, you'll hear about it from your editor, agent, and friends. But knowing precisely what's being said can be detrimental.

*side note: I'd also advise against doing a Google Search for fossilized poop. Trust me on this one.
Posted by Michelle at 12:30 AM

Reviews are an emotional roller coaster that suck away writing energy..but here's the thing..I still check!

Reviews are an emotional roller coaster that suck away writing energy..but here's the thing..I still check!