As some of you may know, I write a paranormal series about a cemetery restorer who sees ghosts.  I love writing these books because I've had a passion for old graveyards since childhood.  The house I grew up in was situated between two old cemeteries, one of which had been abandoned for decades.  That place was very creepy, with sunken graves, toppled statues and the occasional rattlesnake crawling over a headstone.

Anyway, my husband travels a lot for work so now and then, when he comes across an interesting cemetery, he'll stop and take pictures for me.  He shot the following photograph at an old graveyard in Texarkana, Texas, on his way back to Houston from Arkansas just after Christmas.  He doesn't remember the name of the place, but I looked it up and, fittingly, I believe this photo is from Rose Hill Cemetery (a prominent graveyard in my series).

Notice the tiny form lurking beneath that large hanging branch and behind the wrought iron fence (to the far right in the first photo).  For obvious reasons, we've titled this one, "What is that?" 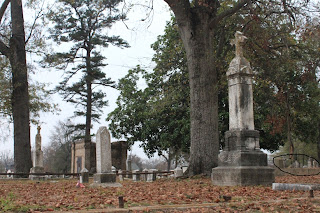 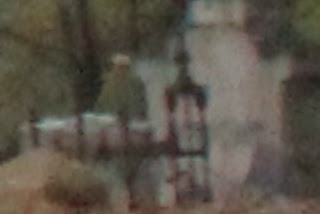 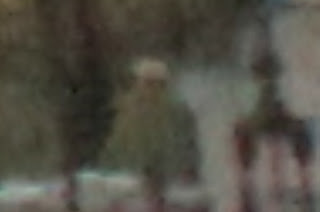 Has life ever mirrored your art?

Ok. This seriously creeped me out. I've been on a ghost hunt in Tulsa with a paranormal team. It's fun to get that adrenaline pumping. And I scare myself all the time--for my art--to trigger the creepy imagery I write about. But if I ever see a ghost for real, Lordy Lordy.

Nice hubby, taking pictures for you. Mine is a DVR guy for me. He's got an eye for weird TV shows that usually interest me.

I have the whole family taking cemetery photos for me now, lol. Nice to get everyone involved. :)