So I got the sweetest emails this past week from a couple kids.  These were a little different from the very nice letters I normally get because the kids asked more or less the same question, and one I'd never have expected: was it okay if they wrote stories set in the ASHES universe?  More to the point, could they write about a particular character they really liked?  Could they make up new characters and run with them?  (One kid even said she'd modeled her Minecraft world on ASHES.)

In other words . . . these guys wanted permission to write fan fic.

Well, knock me over with a feather.

As an unabashed but recovering Trekker, I'm no stranger to fan fic.  Heck, "A Ribbon for Rosie," my first published story--and a prize-winner, to boot--was fan fiction set in the Voyager universe.  I've done a ton of work for hire, and I count many tie-in writers as friends and colleagues.  A couple, I recently tagged for the Next Big Thing Blog Hop because, in my experience, tie-in and wfh writers get too little respect and recognition for a lot of very hard work.  (And I know the work's hard because I've been there, done that--and anyone who thinks it's easy doesn't know apples from their . . . well, use your imagination.)  What people forget: sure, the universe may already exist, but for a wfh-writer, every word is original.  Every plot is theirs, even if they must get a certain character from A to B by the end of the book.  They just don't own the copyright.

No, this isn't going to be a diatribe on a variant of wfh writers don't get no (or enough) respect, even though they don't and most especially not from big-name publishers.  All of us who've done wfh and tie-ins know that.  <shrug>  You learn to live with and come to a state of grace about that, while at the same time realizing that, to the fans of those universes, your books are a big deal.  Having gone to GenCon and a bunch of ST conventions, let me tell you: these fans are loyal; they'll stand in line for hours; they're dying for you to write that next book.

But I digress.  What I thought about when these kids popped into my inbox was the fun I had, as a kid myself, making up my own stories about, oh, Batman, Star Trek, Lost in Space . . . even My Favorite Martian.  At a certain level, every child who's ever opened a book or become a fan of a show or movie inserts herself into the narrative.  It's inevitable; this is what it's like to be lost in a book.  There's a fancy name for it in media studies: textual poaching.  While the French critic, de Certeau, wrote about this first, I'm a bit more familiar with Henry Jenkins's work that focused on the Trek universe (and, at the time, while I didn't find all his points that convincing, the theory's right on--and, oh, I do love that cover). 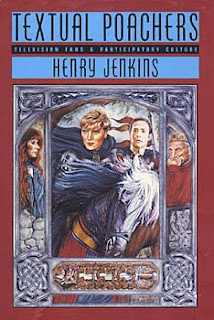 While I agree that this kind of appropriation is all about power and resistance--think, for example, of all that good, homoerotic Trek slash fiction out there--the reality is this: when people find a world compelling, they want to be a part of it any way they can.  The psychology that drives this is no more mysterious or different than the desire to dress up on Halloween or cut loose at Mardi Gras, both socially sanctioned opportunities to act out fantasies.  That this acting-out is limited; that there are boundaries you can't cross . . . this is where the power inequities come in that Certeau and Jenkins are talking about.  You can create on paper what you can't do for real.  You can enter a universe you desperately want to be a part of on your own terms.  It's what drives the desire to write and the fun of reading fan fiction.

So, is fan fiction wrong or bad?  Well, it depends, doesn't it?  Copyright protections exist for a reason.  Can you write fan fiction?  Sure, without question.  What you can't do is write and then show what you've written to your friends, or post it on the web, etc., for money.  But what if you share your story with only one friend?  Or two?  Or ten?  When does this sharing, this more-than-one-person experience, become a violation?  Is it a violation only when you do it for money?

As you might expect, there are authors who fall on both sides of the fence about this.  I'll tell you what I told those kids: I used to do the same thing when I was your age; I'm thrilled you love my stories; I'm tickled my work inspires you to try your hand.

Now, did I encourage them to write their own original stuff instead?  Of course.  But do I understand the impulse?  Sure.  Can they sell what they write?  No.  Can they show it around?

Gosh . . . I'm divided about that because then you're getting into the tricky slippery slope part.  On the one hand, all they're doing is spreading the love, and that makes me feel good.  Honestly, if there's enough love and drive out there, this kind of thing becomes unstoppable.  I know; I'm a Trekker; grabbing that narrative and continuing those stories was half the fun, and what eventually got me writing.  If fan fiction encourages kids to read and write, I'm all for that, too.  You can argue that fan fiction has a lot going for it and benefits you might not have imagined.

But . . . here's the bugaboo: what about the people who may, eventually, charge a couple nickels for a story?  Who give folks a taste, and then tell them that if they want more, they have to pay?  See what I'm saying?  Now they're making money off something that I-- some other writer/actor/painter--own.

So, yeah, the potential for abuse is there.  My gut is that most fans are polite; they're enthusiastic; they understand that the sand has to remain in the box.  To be honest, I see more good coming of this than bad.

Granted, I really don't have to worry about this.  Stephen King has these problems, not me.  For the moment, I'm just tickled a couple kids out there like the series and want to play in that sandbox.  So long as they behave--now, Joey . . . no, honey, you really can't throw sand in Jessie's eyes--it's all good, and maybe a lot more because what they build, they build from the ground up with passion and love for what I've given them.

I dabbled in fanfic for the TNT show Witchblade & taught myself how to write in different genres & at different lengths. (Slash is hilarious btw.) I created an original character that someone asked if they could write fanfic about her. That shocked me. I was flattered, but refused permission. This was an adult, not a kid, and if I wanted to write original work ( which I did), I didn't want to fight someone over who created her. But I think your encouragement for the Ashes world is great. You already have the copyright.

Btw, Fifty Shades of Gray was a fanfic/slash on Twilight.

Whoa, Jordan, that's fascinating . . . about 50 Shades. I think a lot of us writers started out imagining ourselves into other narratives. If you think about it, it's simply a dyslexic step away from dressing up in your mom's clothes and makeup. We're always searching for narratives.

WITCHBLADE? OMG. Loved that show, although my husband--who also liked it--gave the show a nickname I won't repeat. Got pissed when the actress cratered and the series was yanked. Right up there with how pissed I was that TNT (was it TNT?) yanked DEAD LIKE ME.

Best comment about 50 SHADES from another writer: "Well, I like spatulas, too, but I think they should be used for, you know, cooking."

I met many of the cast members of Witchblade when a conference coordinator asked me to be security. I hated Yancey for tanking the show, but that turned out to be a good thing for me. I started writing original stuff after that.

I was secretly in love with Ian Nottingham. After I met Eric Etebari ( nice guy but peculiar), I had to reinforce that I loved Ian, the character.

And DEAD LIKE ME was another fav show of mine. I just got my author friend JT Ellison turned on to it & she bought eps thru Netflix. She lived it. I think she is looking for inspiration for dark humor paranormal.

I haven't read 50 Shades, but like you, I'd heard that line from people who have read the books. Funny. Spatula? Ew. Because of Stephen King in Misery, I'll never use a turkey carving knife.