What got you into the world of the paranormal?

MB: My first taste of anything vampire was when I was fifteen. My friends and I started reading the Nightworld Series by LJ Smith, and I was hooked. From the first book I wanted more, and when there were no more, I wanted other books. I devoured everything I cold get my hands on. From there I found Anne Rice and loved her; I still go back to her books on occasion and my favourite has to be Pandora. These days my favourites are the Black Dagger Brotherhood books, but I still have a huge soft spot for the Nightworld series, even though it has never been officially finished.

In such a saturated market of vampire books, how does yours stand out??

MB: Because it isn't about vampires. The Keepers' Chronicles aren't your typical human girl falls in love with vampire and wants to be turned into the undead. It is nothing like that, in fact! Sure, there's love in the books, and there are plenty of vampires, but what it's really about, the whole series, is the Keepers.

They're what make The Keepers' Chronicles stand out, because they're new. All these vampires, all these takes on the mythology, they all have one thing in common: Vampires are supernatural creatures with the strength and ability to wipe up poor humans from the face of the planet.

So why don't they? Power corrupts, that saying is older than I know, and it stands as true now as when it was first uttered. The vampires of the Keepers' Chronicles are no exception, and what is stopping them is the Keepers. Immortal beings with the power to influence the mind, to keep the immortal races hidden in the shadows. But they have a weakness at the start of the series: when they meet their partners, their mortal lives become theirs. Kill a Keepers' partner and the Keeper dies.

So for those looking for a twist on the vampire genre, a new take on the myth of the undead, the Keepers' Chronicles has just that. Love, danger, vampires, wars, and everything in between.

You've written 3 books for that series, will you stop after those are out or will this be an ongoing saga??

MB: Two books and a short story, yes! And it is not stopping there! The initial series is four novels long: The Last Keeper, Last Chance, Exposure, and Revelations. Then after that there are a couple of other characters who speak loud enough in my head to want their own books, but instead of being sequential, they will be tie ins with the series. The short stories came about because there are some 'missing years' in book one, The Last Keeper, and I got a number of requests to write what happened in that time. However, given the circumstances, it wouldn't make a very happy book, so I decided to write A Glimpse Into Darkness. This is a short story set in those missing years, 1064's U.S.S.R, to be exact, and it follows some of Serenity's life during that time. There will be more short stories in the coming years as the series progresses, but I don't know what they are yet!


With all those subplots demanding their own spotlights and all the books coming out, do you think you'll ever write something else than the Keepers series?

MB: Oh, absolutely! I am in the process of looking at publishing a young adult novel called The Stars Are Falling, and I am actively publishing short horror stories. the next one out will be The Phantom Hour due on October 26th. I have a whole folder dedicated to ideas and plots, though, so I have plenty to keep me going for years to come!

MB: If you want to be a serial killer, try being a literary one: less mess, less jail time! 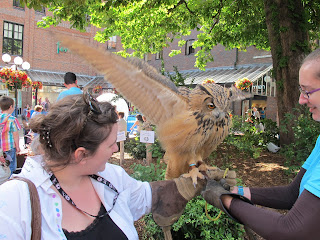 Michelle has been reading and writing her whole life. Her earliest memory of books was when she was five and decided to try and teach her fish how to read, by putting her Beatrix Potter books in the fish tank with them. Since then her love of books has grown, and now she is writing her own and looking forward to seeing them on her shelves, though they won’t be going anywhere near the fish tank.
She blogs and Tweets @michellebirbeck
Posted by Unknown at 1:00 AM

Welcome to ADR3, Michelle. Your KEEPERS series sounds like an interesting twist to the Vampire mythology. Wishing you the best on it. Great cover.

And good advice on being a serial killer. Surely you are watching the new NBC series, HANNIBAL.