Photographs have always fascinated me. Each day, moments of our lives pass by unnoticed – blink and they’re gone. However, a photograph captures a moment; pictures are a snippet of time frozen  on paper, or these days on a digital file. Whenever I look at images of people, I find myself wondering what they were thinking and feeling in the instant the photographer snapped the shot: What was going on in their lives? What was taking place outside the parameter of the frame?

When Tansy Piper, the main character in my young adult novel Through Her Eyes came to life in my mind, I was excited about the opportunity to write about a talented amateur photographer. My own photography skills are next to none – I’ve never used a “fancy” camera with different lenses or developed film in a darkroom as Tansy does, but I’ve always wanted to learn. Tansy gave me the chance to research those skills and find out more about them. I was able to live vicariously through her and get a sense of what it might be like to possess her abilities. 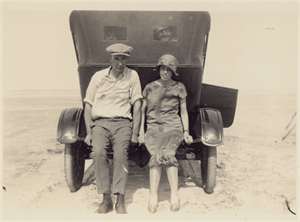 As I developed Tansy’s character and started asking myself questions about her life, her family, her motivations, and her interests, I found that I’m especially intrigued by old photographs that were taken long before I was born. They are a glimpse into a past I never experienced – a way to travel back in time. Sometimes I study pictures of my parents and grandparents when they were in their teens and twenties, and I’m always struck by how little I really know about that time in their lives. What were their hopes and dreams? Who were their closest confidantes? Who were they back then? Most teens ask similar questions about themselves at some point: Who am I? Where is my place in this world? What do I want out of life? Who can I trust to be a true friend?

Thinking about those questions led to my creation of Papa Dan – Tansy’s grandfather. I thought it would be interesting if, while Tansy searched for her own identity, her grandfather began losing his. Papa Dan is dying and has dementia. The only way Tansy can keep him from completely slipping away and disappearing from her world is to try to keep his memories alive. However, that presents a problem because she only knew him as an old man. I thought it would be cool to allow her an opportunity that the rest of us never get – the chance to see her grandfather through different eyes, to spend time with him and his friends in their world when they were her age.

The next challenge was how to accomplish that. I’ve read a lot of novels where a character actually time travels, but I wanted something different. A twist. That's where my love of photography came into play. Instead of truly going back in time, I decided that Tansy would actually step into Papa Dan’s memories through photographs -- those glimpses of moments in the past captured on paper.

Writing Through Her Eyes deepened my certainty that every generation goes through similar experiences and emotions. Your grandparents lived in a world quite different than yours, but I have a feeling they hoped for many of the same things that you do -- that we all do: Love and friendship, fulfilling work, adventure and security.

What do you wonder about when you look at old photographs? Do you see clues of what life must have been like during the time the picture was taken?

Visit Jennifer's website: www.jenniferarcher.net
Posted by Jennifer Archer at 1:30 AM

As you know, I LOVED your book THROUGH HER EYES. Tansy is such a solid young character and your inspirations of photography & the generation gap made your plot very unique. Great post, Jenny.

I took a photograghy class & learned how to develop 35mm film & do prints. I got hooked on black & white because lighting & contrast were so important. Today's digital cameras might be easier to operate & with graphics software you can enhance anything, but it lacks soul. Being in a darkroom & working with chemicals & manipulating the photographic paper was just plain fun. I can see how Tansy would have been drawn to it.

I really want to take a photography class. It's on my "to do" list! That's so cool that you did it, Jordan. I agree that digital cameras just don't produce the same effects.

I love old photos; my ex has some great ones of his mother's coming out party in the 50's, which looks like the set of a Busby Berkeley musical. So cool.

Jenny, what an excellent post! I get goosebumps when I look at old photographs. I think everyone does to some degree. That's why I think Ranson Rigg's was pure genius to come up with his book Miss Peregrine's Home for Peculiar Children. He recognized this similarity in all of us, and capatilized on it in a book. BRILLIANT.