I Have a Little Confession to Make...

I know I find myself in the teeny tiny minority when it comes to certain things that I consider vastly overrated. Things that, unlike the rest of the world, not only can I take or leave, but I secretly kind of…well (to avoid using the H-word), strongly dislike.

I had a whole other blog ready to go this week, but this morning, awakened to a familiar sense of dismal dread at the realization that my second favorite season has drawn to a close (Fall is my absolute favorite) and that my least favorite season (by far) is now underway—I felt the need to unburden my soul. Sorry. Bear with me. Blogging is cheaper and, for me, more cathartic, than therapy.

Ever since I was a tiny girl living in the western New York snowbelt, I’ve felt as though I drag around March, April and May like concrete blocks attached to ankle shackles.

Is it the weather? That’s certainly part of it. In my hometown, we frequently drove through blizzards to get to Easter mass in a church smelling of wet wool and carnation corsages. At my First Communion, the ground outside was whiter than my dress, my veil, or the host. And we frequently huddled in ski coats at the Memorial Day picnic that inevitably adjourned to someone's garage when sleet started falling.

Even where I live now, almost 500 miles away in metropolitan New York City, springtime weather is never as nice as I somehow expect it to be. Here's a photo I snapped from my window last March 20th: 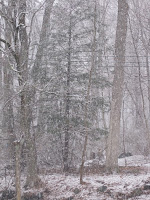 Or if it is nice—if the sun comes out for a glorious day or two—I find it oddly unsettling to be outside in 80 degree sunshine with nary a leaf on the trees overhead and nothing in bloom but the stray crocus. The balmy reprieve is further tainted by the grim knowledge that it isn’t here to stay. No, it’s simply popped in like a teasing kiss of an old flame, only to abandon you again to muddle on through the bleak chill.

This is the season of frozen slush caked over dead leaves, of brown grass and bare branches, of mud, mud, mud. The season of tugging perpetually-stuck antique window sashes up when afternoons grow freakishly warm, then struggling to heave them all down again when a cold wind kicks in right before dinner.

The season of noticing every streak on the panes of those antique windows—not to mention grimy sills and dust bunnies galore—yet, juggling motherhood with perpetual writing deadlines, I can’t possibly pull off a proper weeklong spring cleaning the way my mother and Martha Stewart Living taught me, leaving me with a vague sense of failure and the inability to rest easily in my unclean house.

As the season progresses, golden Daffodils dare to unfurl, only to be beheaded by tribes of apparently mentally challenged deer that descend on our yard forgetting that they don’t like Daffodils until they’ve taken a bite. So they spit them out beside the mutilated stems and move on to the next clump to – Doh! – repeat the process. Adding to my gardening frustrations: I invariably spy a local nursery ad in a Sunday circular that tempts me to cast zone calendar caution to the warm wind. Off I go to spend far more than I should on plants that go into the ground long before they should, only to watch the tender green seedlings die a cruel black death in a harsh late frost.

It's the one season when I don't revel in my self-employed lifestyle; I curse it as I track down stray receipts for the accountant, brace myself for the final tally, and try to swallow back the bile as I write an oversized check to the IRS on April 15. 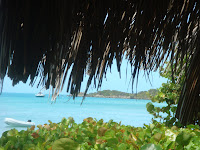 It’s the season of being held captive to the school calendar, wistfully trying to plan a tropical escape for the kids’ spring break, only to find that there aren’t enough days off to drive far enough south to find the truly warm sun and sea, and that airfare out of all three metro New York airports has more than quadrupled for the weekends that bookend the break.

So where do we go? Upstate to visit family or (this year) colleges, hauling across New York in weather like this (yes, this is an actual spring break photo, shot through the windshield of our car on the Thruway a few seasons back): 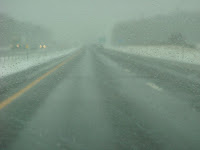 It's the season of tugging on pilling sweaters in drab colors, sick of the dreary winter wardrobe yet loathe to trade it for shorts and flip flops and tee shirts that bare milky legs and chapped heels and arms gone flabby in the eight months since I swam my daily laps.

The season of turning the clocks ahead abruptly just when mornings are starting to grow brighter, not only sacrificing an hour of sleep, but going back to rising in the cold dark chill—and then, exhausted as evening settles in, I'm faced with a long, long looooong day that refuses to end. Now the sky takes forever to darken, making me feel as though I should still be productively working, or doing errands, or out jogging—doing anything but what I really want to do at that hour, which is put on ratty old pajamas and sit like a worthless slug in front of bad reality television.

I thought my annual springtime dread would subside when both my sons were born in this particular week—the week that marks the transition to my least-favorite season. And it did, at least for a couple of years. I disliked being pregnant even more than I dislike springtime, so it was a relief to put that behind me even at the torturous expense of childbirth. And of course, I love my children more than—well, anything ever. Cuddly newborns and birthday party planning kept me happy for awhile. 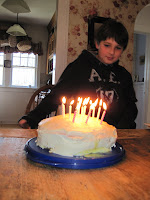 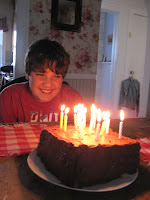 But a few days before my youngest son turned two, tragedy struck: my mother-in-law died of breast cancer. On that same morning—March 11th—as we headed over to her deathbed, my parents called to say that my own mom’s breast cancer, until then in remission, had metastasized to her bones. My mother, too, died in the spring several years later. On her mid-April 63rd birthday, we were told to call in hospice as nothing more could be done. She passed away the day after Mother’s Day.

Now, Mother’s Day has become bittersweet, as we mark the anniversary and mourn the loss of both beloved mothers. 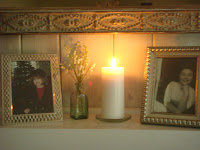 Even my children’s birthdays are bittersweet reminders of two grandmas who should be there, doting and beaming, doling out special presents and helping with the messy cake cutting and snapping photo after photo.

Springtime is not, in our family, about rebirth and new beginnings. It’s about loss and memories of saying goodbye as cold rain fell--still falls--like teardrops from a gunmetal sky.

I know. I can’t help myself. It is what it is. Yet oddly, it’s always been this way for me, long before tragedy came along.

Last year, realizing I was basically alone in my loathing of springtime—a freak of nature, down in the dumps at precisely the time of year when everyone else is getting over bouts of winter doldrums—I found myself confessing my misery to my doctor during a routine visit about something entirely unrelated. Okay, not just confessing. Crying. She urged me to call a shrink.

That was a big, reluctant step for me. I’d tried therapy twice before in my life: once after a bad college breakup, and again when my mother was dying. I hated it. It seemed counter-productive to sit around with a stranger dwelling on my troubles when all I wanted to do was be busy enough to get my mind off them. I had zero patience for the therapy process. I still have zero patience for it.

But this time, I lasted through enough sessions to learn--to my utter shock—that there’s scientific--chemical, biological--validity to my theory that I suffer from a form of reverse seasonal depression. The condition may not be common, but it's legitimate.

There’s not a whole lot I can do about it, unfortunately—I'm not big on medication and again, I’m not a talk-it-out-on-the-couch kind of gal--but somehow, it helps to know that I’m not…well, crazy.

What, you might ask, does any of this have to do with, um...writing? Plenty. You see, every spring for many years, I've had a simultaneous book deadline and book release. Every year, it's gotten harder to juggle those professional obligations with my kids and my other responsibilities. Something had to give--and it was usually the work.

Last year, after weeks on end of staring blankly at the screen, I was starting to wonder if I had under-estimated my ability to handle a high profile, high pressure career. I thought maybe the stress of all that writing and promoting, with anywhere from three to five releases most years, was finally dragging me down. I honestly feared for my career when I found myself too paralyzed by my bleak mood to keep up with my usual (and necessary) productivity and nearly blew my deadline. That was the day I broke down and cried in my doctor's office.

Now, though, I know it's not about that. I haven't lost my writing mojo. This oppressive mood, like the season that triggers it, will pass. And until it does, I’ve given myself permission to boldly confess my bizarre foible. I’m even allowing myself to use the h-word. Ready? Here I go:

My name is Wendy, and I hate spring.

There. I’ve said it. 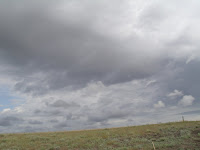 But even I can find a bright side--the proverbial silver lining amid gunmetal rainclouds: the first day of spring means that we’re halfway back to glorious autumn.

And I, for one (literally), will be counting down the days. 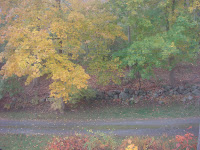 Posted by Wendy Corsi Staub at 1:06 AM

Haha!You poor thing! I wouldn't like spring if it started off that way either. I'm blessed enough to live in a place where the trees bud and flowers bloom. And as long as you can withstand the 50-60 mph gusts that often accompany this season, you can step outside to a warm sunny day and enjoy nature. ;)

Wendy, you write the most honest blog posts. It blows me away.
I grew up in NY...about 30 miles north of NYC. I hated winter... standing outside waiting for the school bus for soooo long in awful weather. Cooped up in the house, 4 kids, 2 parents, everyone yelling. Spring was a relief. My dad grew crocuses... the first pale violet blossoms proved there was life after the frozen tundra...When I moved to L.A. what struck me was that spring here has no pastel colors. The flowers that bloom are bright purple, not pale. It seems wrong somehow... there is a time for pastel, and a time for bright. As there is a time for dark, in whatever season it may fall. The world is filled with all shades of colors... and we are the more human for feeling everyone one of them.