When three wheels are better than two. 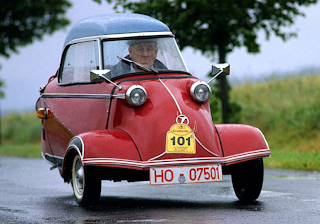 Today's post isn't really about the cute and peculiar little German car above with its odd number of wheels. Although three can make for a much more interesting ride. Take love triangles, for example.
When I received my content edits from my publisher for Splintered, one of the things they wanted to expand upon was the two leading guys in relation to the heroine. There was potential there for a love triangle that I hadn't fully explored.
Later, a family member pointed out to me that she wasn't surprised they'd asked for those changes, because everyone was trying to emulate Twilight. She was convinced Stephanie Meyers started the whole "love triangle" craze in literature.
I kind of had to giggle, because there's literature dating back as early as the 1500's that utilized this same technique before any of today's famous authors were ever even born. One of the most unique triangles of its time was in Shakespeare's Twelfth Night, where a woman dressed as a man, falls in love with a man, who's in love with another woman who falls in love with the first woman (thinking she's a man). 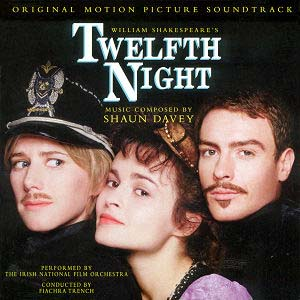 Confusing? Yes. But who could turn away from such a hot mess of unrequited love and wire-taut tension?
Wuthering Heights by Emily Bronte (1847) is a more traditional triangle, yet there's a paranormal slant. Catherine, Heathcliff, and Edgar were caught in a crossroads of passion that in the end transcended death itself.  There was also The Phantom of the Opera by Gaston Leroux (1909) with both the dark Phantom and the equitable Vicomte of Chagny vying for the lovely and innocent Christine Daaé's affections.
I'm not going to explore why love triangles work. It's obvious they do since they've been a literary staple in gothic romances and the like for centuries or longer (there are even examples in the Bible).
But as for me personally, the best love triangles are either when the heroine is attracted to both men for different reasons ... when somehow they are the two halfs to her perfect soulmate's whole, in which case she'll always be questioning who she chooses for they only have half of what she's looking for; OR, when one of the heroes realizes who the heroine is truly better off with and sacrifices his own happiness for hers. 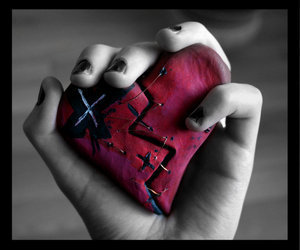 Mmm. Nothing hits the spot like a broken heart. ;)
Here's a short list of some my favorite literary love triangles to date (including the two I've listed above) in no particular order, from classics to present bestsellers:
Are some of your favorite third wheel love stories up there? Do you have some favorites in films? I'd love to hear of any that I've missed!
Posted by Anita Grace Howard at 4:33 AM

Love Triangles are hot stuff!! They're SO common.
Victoria Holt, one of my fave authors, used them quite a bit.

I LOVE your triangle. *blissful sigh*

Jordan~ I almost listed Gone with the Wind! And how about Casa Blanca? Mmmm. Unrequited love.

Jessie~ Hey you! That's so true; they're used so often, but it's amazing how many people I talk to who think Twilight cornered the market w/them. LOL. And awww, thanks! I know how much you love a certain winged bad boy. Hee. ;)

Grr...I love me some good triangles. I agree w/Jessie, YOUR love triangle is pretty amazing. I'm also a fan of Janet Evanovich's with Stephanie Plum/Joe Morelli & Ranger. Neither guy is good or bad, they're just very different. That's what makes love triangles so fun (as long as I'm not in one!), you can take sides!!
(go team Morelli!)

You nailed most of my favorite love triangles! And let me just say this line: "a hot mess of unrequited love and wire-taut tension..." made me LOOOOOL.

And YES! What Bethany said! I loves me some Stephanie Plum and the whole Morelli vs. Ranger action.

I'm another Stephanie Plum fan! Joe and Ranger -- hard to choose!Great post, Anita. Something must be in the air. I just did a guest post about love triangles at CAN'T FIND A BOOKMARK!

Bethany~ Hee. Funny you should say that about my love triangle, considering you and Jessie are on opposite teams. LOL. Thanks pal! And I really need to read Stephanie Plum. I'm even more convinced of that now.

Kerri~ HA! Thanks twinkie. I've put that movie on my to watch list. :) Hmm. I'm going to have to learn more about this Morelli and Ranger. They sound YUMMY.

Jenny~ Thank you! I need to hop over to your post!

There's the weird love triangle in Ethan Frome, which has, from the time I first read it in 11th grade, haunted me with its epic sadness. In that book, it's the guy in the middle. Yes, I'm reaching back, too, Anita!

Carol~ LOL! Well, I'll have to put that one on my TBR pile now. I adore tragic love stories! And seriously, they knew how to do it right back in the day, didn't they? ;)

Great post, Anita! It seems that in literature, two is boring and three is company ;)

I LOVED the James/Lily/Severus triangle, but my favorite "old" one is Wuthering Heights. *sigh* Good stuff.

Awesome post Anita! I think Katniss totally should have ended up with Gale though :)

I'll admit, I don't read much romance. Never been a huge fan of it. But, besides some of the ones already mentioned, my favorite love triangles always have a little comedy involved, which is probably why I never cared for the Twilight or Hunger Games triangles. Don't get me wrong, I like the tension a love triangle creates. But when it's all about the person in the middle being wishy-washy, it starts to grate on me.

A.M.~ Thanks cutie! And yep. Wuthering Heights is soooo well done. Can't beat the classics. Thanks for stopping by!

Dan~ LOL. Team Gale, huh? That love triangle was good, because either guy would've been right for her.

T.S.~ Long time no see! How are you? Yeah, I prefer if the girl is really set on which guy she wants to be with, and the other one just causes her a few second thoughts; I feel like that's pretty realistic in YA since teens are still trying to discover who they are, and their lives are filled with so much insecurity. But in the adult triangles, it's a little tougher to make them work w/out the woman feeling immature and fickle. ;)

Ooooh some of my favorite triangles too! I am such a sucker for a love triangle.

Also, I am giggling at the idea that Meyer created it. She sure captured hearts with hers, but oh man. That's like saying she invented vampires...