by Diane Weipert (aka T.J. McGuinn)

Today we're so excited to welcome Diane Weipert, aka T.J. McGuinn, whose awesome YA debut THE WAKING MOON is tearing it up on Wattpad right now (you can read it there FREE!) I was lucky enough to get my hands on a copy months ago, and it was one of my favorite books of last year. So definitely check it out!
And now, without further ado: Diane Weipert dicusses being a tomboy and damsels in distress...

When I was little, I was a daddy’s girl. I loved doing errand runs with my dad, even when he went to boring places like the hardware store. Even though I wasn’t into sports, I’d wear a Raiders jersey and watch football games with him, dancing around and 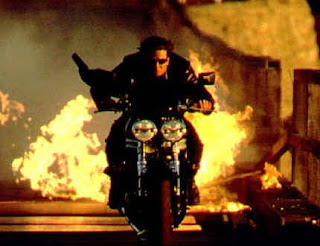 high-fiving whenever our team got a touchdown. And even though I hated to ride roller coasters, I would always suck it up and go with my dad, so that he wouldn’t have to ride them alone. But more than anything else, I’d go with him to see action movies--loud, explosion-filled stories that I never would’ve watched on my own.

For me they were “guy movies.” The heroes were strong. They never showed fear. They always kept their cool. And there wasn’t a bind too tight for them to escape. And these heroes were always men. The women in the films were always beautiful. But that was it. Beyond the perfect curves and gorgeous hair, they didn’t have much going for them. They couldn’t find their own way out of a shoebox. They ran away from bad guys in impractical footwear. They wore very little and screamed very loud. And I hated that I was supposed to identify with them. Then Terminator II came along. According to its backstory, the Linda Hamilton character, who’d spent the first Terminator movie running around in a pink waitress dress, had spent several years in a mental institution getting really buff and really tough. Now she was strong. She never showed fear. She always kept her cool. And there wasn’t a bind too tight for her to escape. Throughout the movie, I put myself in her place. I imagined I could be that strong, that cool, that tough. It was then that I understood why guys like those movies so much. And why I never did.

Everyday life is difficult. It is rife with moments that make us feel stupid or ugly or alone or misunderstood. We’re at the mercy of the world and all its cruel whims. We feel helpless. That’s why we’re drawn to books and movies. They allow us to escape the limitations of our lives (and ourselves) and experience the extraordinary. And there’s nothing extraordinary about a hand-wringing damsel in distress. It’s just an exaggeration of how we secretly feel every day.

Just like boys, (who, I’m sure, also spend their waking hours feeling inadequate and insecure) we’d like to get lost inside some fantasy realm where girls have more to offer than bulging sweaters. We’d like to know that there’s power in us. That we can save ourselves, and others, too. That we aren’t just breasts, butt, and legs, but brain, muscle, sinew, knuckle, and a thunderous beating heart. 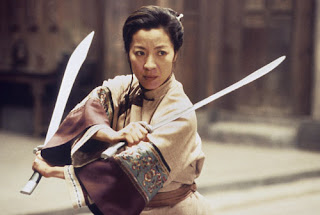 The main character in my novel The Waking Moon is a regular 16-year-old girl facing bizarre and horrifying circumstances on her own. But she doesn’t sit around waiting to be saved. She takes control. It’s what we all want to do.

If you ask me, we’ve spent enough time longing to be ravished by a gorgeous vampire. It’s time for girls to grab bows and arrows and get in the game. We have a revolution to lead! 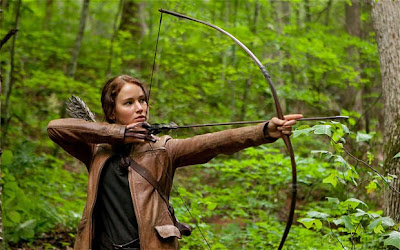 Diane Weipert has written mostly for film. Her feature Solo Dios Sabe premiered at Sundance in 2006 and starred Diego Luna and Alice Braga. Since then she has developed scripts with actress Michelle Rodriguez and written a psychological horror script for Eddie Izzard's production company. Diane's young adult novel The Waking Moon, written under the pen name T.J. McGuinn, is edging in on 1,000,000 reads in only two months on Wattpad.com. Follow her on Twitter: @dianeweipert
Posted by Michelle at 1:00 AM

Yes! Thank you....I'm all in favor for more positive female role models in literature, as well as movies and TV shows, where women with good problem-solving skills, courage, compassion, and fortitude are emphasized.

Welcome to ADR3, Diane. Love your post. I'm a big believer in strong heroines for my adult books but especially for YA. It just feels wrong to read books where the heroines are wishy washy in their decision making abilities or defer to others to save them.

So glad you are writing strong girls. Kudos! Looking forward to reading your book.

Oh and btw - Katniss gets my vote. The girl carries weapons for crissakes.