This is my week to post, but I couldn’t let my blog mate, Michelle Gagnon, not get a shout out for her debut YA – DON’T TURN AROUND – that was officially released by Harper Teen on Aug 28th. (Book 1 of a series.) Making a leap from writing adult thrillers to creating stories for teens is a huge endeavor. It’s reinventing yourself for another group of readers. That can be scary, yet very fulfilling in ways you never imagine.

Early reviews have been stellar too. Starred reviews are very rare. Many talented authors can go a life time without seeing one. Below are two for Michelle.


"Be prepared to stay up all night reading."
~VOYA (starred review)
“Gagnon’s YA debut is a pulse-pounding scary-great read…[that] will have teens begging for more. Girl with the Dragon Tattoo for preteens and teens, a surefire hit.”
~Kirkus Reviews (starred review) 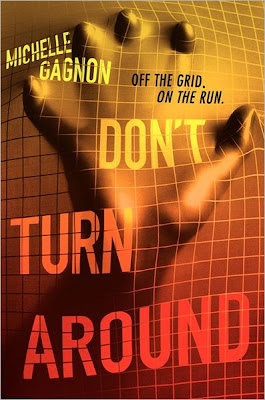 Don’t Turn Around (Series-Book #1)
by Michelle Gagnon
HarperTeen, Now Available!
Sixteen-year-old Noa has been victimized by the system ever since her parents died. Now living off the grid and trusting no one, she uses computer hacking skills to stay safely anonymous and alone. But when she wakes up on a table in an empty warehouse with an IV in her arm and no memory of how she got there, Noa starts to wish she had someone on her side.
Enter Peter Gregory, A rich kid and the leader of a hacker alliance. Peter needs people with Noa¹s talents on his team. Especially after a shady corporation called AMRF threatens his life in no uncertain terms.
But what Noa and Peter don¹t know is that she holds the key to a terrible secret, and there are those who¹d stop at nothing to silence her for good.    Fans of THE GIRL WITH THE DRAGON TATTOO will devour the story of Noa, a teen soulmate to Lisbeth Sander.

Buy at these LINKS

Whoo hoo! Congratulations on your release, Michelle! The cover is seriously scary and awesome.

I want this book in my YA collection in hard cover, but I may have to download it on my e-reader. Can't wait.

The books on this blog are AMAZING!

Thanks so much, Jordan, this was really sweet of you!!! I'm really happy...and exhausted, since we just moved house this week (you have no idea what I would give to find my nighties right now--either that box got lost, or they're buried in with the kitchen stuff). Kisses to all of you-
xoxo

I hate moving. But doing it during release week is unreal. It might be a distraction, but I could think of better ways to get sidetracked in a good way.

I'm happy for you. You've taken some big steps in a great direction.