The One Place I Always Feel At Home

"A library is a good place to go when you feel unhappy, for there, in a book, you may find encouragement and comfort." -E.B. White

There’s a scene in my novel THROUGH HER EYES, in which sixteen-year-old Tansy, on her first day at a new high school, escapes to a remote corner of the library during the lunch hour to avoid having to eat alone in the cafeteria. When I wrote that scene, I knew exactly what Tansy was feeling because I once did the very same thing. I moved to a new city and started a new school at the beginning of my junior year in high school, and I hid out in the library during my lunch period for the first several days.

Everything at Amarillo High School felt foreign and unfamiliar to me – except the library. The second I stepped into that hushed room full of books, I experienced a sense of calm and comfort. I’d found the one place in the building where I could let down my guard, relax, and just be myself. I was surrounded by old friends – the hundreds of characters I’d come to know through years of reading.

Since then, my fondness for libraries has only grown stronger. There was a time when I even entertained the idea of becoming a librarian. I’m sure that career involves stressors that only those who do the job can understand, but I still fantasize sometimes about spending my days amongst the shelves and stacks. Such a peaceful workplace seems a rarity in our hustle-bustle world. But libraries and librarians offer us so much more than a place of calm. They provide information on a variety of topics, learning materials, and entertainment. I can spend hours in a library and never get bored.

Because I can’t imagine life without libraries, I wondered how they came to be such a fixture in our American communities so I did a little research.  According to History Magazine:

“The oldest library in America began with a 400-book donation by a Massachusetts clergyman, John Harvard, to a new university that eventually honored him by adopting his name. Another clergyman, Thomas Bray from England, established the first free lending libraries in the American Colonies in the late 1600s. Subscription libraries - where member dues paid for book purchases and borrowing privileges were free - debuted in the 1700s. In 1731, Ben Franklin and others founded the first such library, the Library Company of Philadelphia. The initial collection of the Library of Congress was in ashes after the British burned it during the War of 1812. The library bought Thomas Jefferson's vast collection in 1815 and used that as a foundation to rebuild. It wasn't until waves of immigration and the philosophy of free public education for children that public libraries spread in the US. The first public library in the country opened in Peterborough, New Hampshire, in 1833. Philanthropist Andrew Carnegie helped build more than 1,700 public libraries in the US between 1881 and 1919.”

Sometime after the Civil War (approximately 1876), the American Library Association was founded, and Melvil Dewey developed and published a method of classifying and organizing materials within libraries called the Dewey Decimal Classification System. During this period, the profession of “librarian” became more recognized with Katharine Sharp’s involvement in the founding of the library school at the University of Illinois. Mr. Dewey recommended Ms. Sharp for the job, and she is now considered to be one of the most important library educators in American history.

In the decades since, libraries have changed and adapted with the times. Computers, the internet, the e-reader – all have altered the way libraries operate. But one thing hasn’t changed since the late 1600’s when the first lending libraries in America opened their doors: Libraries and librarians strengthen our communities and enrich our lives. 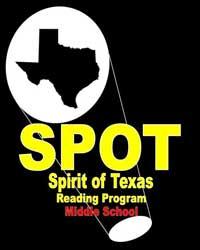 ~I am honored to have been chosen as a Featured Author for The Spirit of Texas Reading Program – Middle School during the upcoming school year.  This Texas Library Association sponsored program is in its first year. The TLA website states:
“The original idea for the Spirit of Texas Reading Program came from Texas author, Andrea White. Mrs. White envisioned a more robust, dynamic relationship between Texas libraries and Texas authors/ illustrators where authors and illustrators constantly came into Texas libraries either in person or via the internet to talk to students about their books and the writing process. With the help of librarians Natasha Benway (South Regional Public Library), Rose Brock (Coppell ISD), Renee Dyer (Weslaco ISD), and Jennifer Smith (East Central ISD), Mrs. White’s original idea was further developed to include an interactive website, original programming by Texas librarians, and annual awards for Texas authors/illustrators. The Spirit of Texas Reading Program began in 2011. The name “Spirit of Texas” was chosen because the program hopes to encourage a greater understanding of what it means to be a Texan and an appreciation for the literary works of and about Texas and Texans.”

For more information about this wonderful program, visit the Spirit of Texas website.
Posted by Jennifer Archer at 4:30 AM

Congratulations, Jenny. That list, you are in good company. I have great memories of practically living in my elementary school library where I read every book that had horses. Nice post.

Thanks, Jordan. Sorry I'm just now responding to this comment. Craziness abounds in my life! I think all writers grew up in libraries. We have that in common, for sure, and so much more!