Now that I've had a month-long break from writing (and while I'm waiting for my next set of edits) it's time to start planning another book. And although I can't officially announce what it is, I can share my crafting process.

I'm totally about the visual. My first stage of starting a story is building characters: what they look like, what their GMC (Goal/Motivation/Conflict) will be, and their personalities/names. To aid in this, I have a pinterest board for fascinating faces that fuel my imagination:

﻿ ﻿ Since my current project is one I started a while back, I've already got the characters lined up.

Which means I move on to stage two: creating the settings and world. This is how I feel when I get to start world-building:
It's one of my favorite things EVER. Maybe because it's when I really turn my imagination loose and embrace the crazy. Anyone who's read Splintered knows what I mean. Again, I have inspirational pinboards for world-building:
﻿ 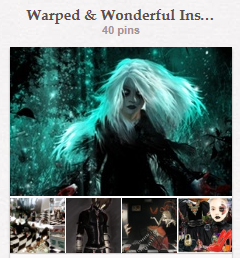 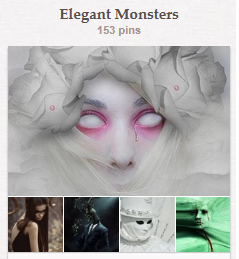 But, one of the most fun things about world building is I get to indulge in all the junk-food my wee little brain can digest.

I'm not talking cheetos or twinkies (although those do have their place, along with coffee and inordinate amounts of chocolate). I'm talking about horror movies with surreal plots, tons of shock value, and reel upon reel of grotesque eye candy.

Creepy critters and disturbing settings work like a defribrillator to my muse, and it's even better if the plot is mainly black and white without too many grays (in other words, junk food for the mind). That way, my brain is free to gorge itself on the visual aspects without having to think too hard about layers or predicting the ending.

Recently I've discovered the Silent Hill movies. Because they're based on computer games, the plots are mainly good vs bad and there is no shortage of gruesome graphics, scenery, and monsters.

Here are two of my favorites from the 3rd movie:

(1) A spidery creature made up of mannequin pieces. The first time I saw it scuttling down the wall, it was SO CREEPTASTIC I salivated. Heh.

I posted a still shot, but if you're brave enough to see the creature in action, feel free to click on the video clip... 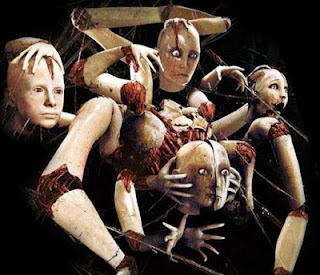 (2) Mutated rusty-razor-bearing nurses whose faces are a macabre twist of skin that looks like an exposed brain. Since they have no eyes or noses, they react to their other senses: touch and sound, and move in a really jerky manner that makes them even freakier. 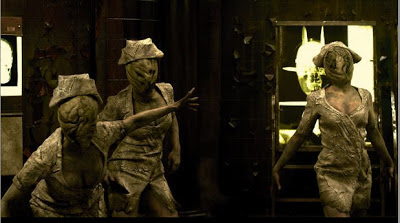 Watching movies also keeps me attuned to the distinctive movements of the creatures and how they react to their setting, which puts that foremost in my mind as I'm building my own worlds and monsters.

As for an actual setting that has spoken to me, there was a scene in a decrepit amusement park that inspired a deliciously eerie idea for a carnival in my newest project. I can't WAIT to write it. ;)

I mean, seriously, with an entrance that looks like this, who wouldn't be inspired to create something terrifying ... or at the very least, to run far, far away. 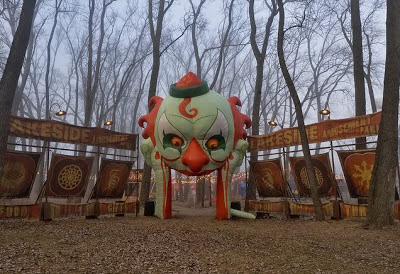 Seeing as I'm a glutton for weird creatures and places, I guess I've found the perfect calling and outlet by writing dark and creepy novels.
Posted by Anita Grace Howard at 6:00 AM

Great post, AGH! Movies are a huge part of my writing process as well. I discover a lot of songs through indie flicks. Plus, sometimes it's nice to let your mind run free for a bit and focus on the beauty we can often see in movies. And while we're not exactly talking about real junk food, I have been known to eat an entire bag of movie popcorn on occasion.

You are SICK! How can such a sweet person conjure such wicked lovelies? Thanks for sharing your process. It's like you're playing dress up with dolls at Tim Burton's house. *snort*

Try adding peanut or pretzel M&Ms to that popcorn tub.

LOL. Thanks David! I agree about beauty, too. I'm not just a horror junkie. I also get to craving visually stunning movies such as Life of Pi and Pan's Labyrinth sometimes. Or anything Tim Burton, of course. The strange and the beautiful seem to be the most appealing to me. And I've found great songs for my playlists through soundtracks as well!

I'm w/you on the popcorn. Can't beat the theater's brand for some reason. :)

JD, haha! I know, right? The people I used to work with said the same thing: "How can Mary Poppins come up with such freaky stuff?" *snorts*

Ladies and gentlemen, THIS is what happens when JD and AGH get together. Snorting. ;)

Great post! Love the visuals. I wonder what it is that draws us to such macabre things?

But at least I know what draws us to popcorn & M&Ms. Yum!

Erm, ahem. YES, the snorting was in fact figurative. Hehe

And Sechin, writers are just weird. There's no two ways about it. But at least we have good taste in REAL snacks. LOL