Confession time. I am not a reality TV show watcher. I catch the occasional show simply because I can’t believe some of these shows are on the air. This last Halloween, my husband and I dressed as ZZ Top, but this year as we wore the same thing and sat on our front porch to hand out candy, everyone thought we were DUCK DYNASTY. That made me curious enough to watch the show. *snort* OK, I got a kick out of it. It quacked me up. 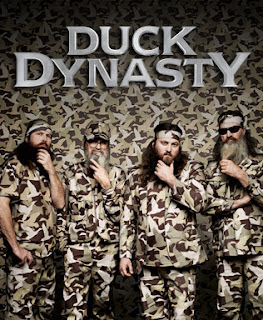 Here’s a picture of my husband on Halloween. He puts the NASTY in DUCK DYNASTY, right? (Our neighbors didn’t recognize us. They thought Honey Boo Boo had moved in and squatted on our property.) 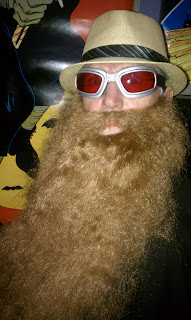 Here are a few Reality TV shows I’d like to see:

Survivor Meets Hannibal – I’d like to see a Survivor show that puts real teeth into surviving. Losers become the evening meal for the survivors. This can put a spin on Hell’s Kitchen or Chopping Block. Who wouldn’t want to see Chef Gordon Ramsey get whittled down to size, literally.

Hate My Kitchen – I would love to see a show where a guy with a camera crew visits a local Home Depot looking for someone interested in getting a kitchen makeover. They get these people all fired up that a crew is coming over to gut their kitchen. When the crew arrives, the hunky host of the show hands a sledge hammer to the homeowner and tells them to get started. The husband and wife totally get into wrecking their kitchen, but when they turn around, no one is there to help them, except the camera guy. Talk about being committed to a reno-job! There is nowhere except up from ground zero, folks. (Sponsored by Home Depot.)

I Can Do a Better Job – Anonymous people online are tracked down through their internet service providers and randomly selected to put their money where their mouth is after posting scathing reviews. Anyone critical of films, books, music, celebrities, doctors, government officials, ANYONE—they get an opportunity to shine and show how they can do a better job…while the universe is watching over their shoulder.

So these are a few ideas I had for Reality TV shows I’d like to see. Do you have any ideas to add? What shows do you watch and why do you like them so much?
Posted by Jordan Dane at 1:00 AM

I'm surprised you didn't mention Deep South Paranormal - think ZZ Top ghost hunters... tempted to watch? You should, they're kinda funny - that is if you actually understand what they say!!

Is that a real show on now? Sounds hilarious. Get red-neck-ified!!!! That's putting the BOO in Honey BOO BOO.

These are hilarious... and as disturbing as most other reality shows!

I want to see Celebrity Mars Colony, where we launch a bunch of celebrities into space on a one way mission. Maybe the viewers could phone in to vote for who they most want to send off the planet.