The other day, someone asked how finishing a trilogy felt.  Sad came to mind although I wasn’t sure if that was exactly what I meant.  Empty is more like it, I guess, but I feel that way after any book, so finishing a trilogy isn’t all that different for me.  It’s one of the reasons that I make like a shark and keep moving on to the next project.  In truth, I didn’t feel quite as sad/empty after SHADOWS because I knew there was more to the story and yet another book to come.  (But I was plenty grumpy; just ask the husband how relieved he was when I started WHITE SPACE.) With MONSTERS now out, there’s a certain finality, a true closing of that chapter, and I feel the end—and loss—of this series much more intensely than I thought I would.  I wouldn’t say it’s more than my standalones; I know that I always wonder what happens next for all my characters.  But leaving this series is definitely tough—and more so, now that it’s actually on shelves.

I’ve never finished a trilogy before, so I really wasn’t prepared for just how intense the ride and loss are.  Notice that word: finished.  Once upon a time, back in my Mechwarrior days, I was on tap for a trilogy; I’d even written the first two books and was looking forward to the third.  Unfortunately, the line disappeared beneath my feet (or my keyboard, as it were).  That happens.  Imprints go away; licenses aren’t renewed; publishers fold.  I remember being sad then, too, but in a different way because I really wanted to finish this character’s story.  All I could think was, whoa, there she is, little Katana Tormark, with only one friend left to her in the whole wide world . . . and it just so happens that he’s also the psychopath who murdered just about everyone she ever loved.  (God, I loved that psychopath to death.  Jonathan was a gas, so flippin’ fun to write, because he was so perverse.  I mean, we’re talking really really perverse, and in the most deliciously seductive way.  When I was a forensic shrink, I paid attention.)

Talk about an unfinished life. 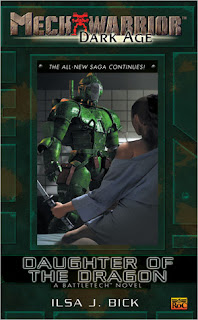 The same thing happened to me with a character arc and set of stories I was developing—and had already set up in previous novellas—in the Star Trek: SCE series.  Never heard of them?  I’m not surprised.  SCE was e-book only (with compilations released in paperback a year later).  The series editor, Keith DeCandido, understood the importance of e-books before they really caught on, and so the series fell victim to the fact that there just weren’t many platforms and the experience wasn’t so hot.  I think you could read them as pdfs or something; I know I squinted through several on my first little Palm Pilot.  (And how times have changed; go back and watch the first two seasons of NCIS, and see Kate poke her Palm with a stylus.  A decade ago, that was hot stuff.)  Anyway, that series was ahead of its time in so many ways, and was eventually axed by Paramount, even though the paperbacks did fine (and, in fact, the one in which my two-parter, WOUNDS, appeared did extremely well in paperback, and still does pretty fine, all things considered).

Anyway, because Paramount pulled the plug, the fabulous four-book arc I was planning and set up in the WOUNDS sequel/follow-on, GHOSTS never got off the ground.  So Elizabeth Lense remains strained on Earth, a character in limbo—and still pregnant, by the way—and now I’ll never know what happens because I can’t write that character’s story anymore.  She belongs to Trek, not me. 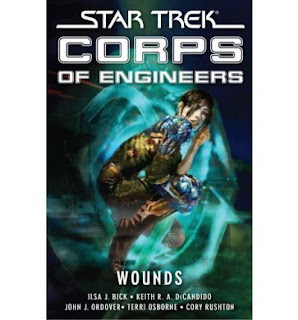 But these ASHES guys are my characters, my babies.  So I guess what we’re talking about here is when and if you finally let go and a character—or characters—leaves your life, which isn’t all that dissimilar to letting go of a kid, a sort of go forth, young man kind of thing.  Some author-parents are better at tolerating that empty nest than others.  Me, I fill the emptiness with other stories and new kids to worry about.  But I can see how, as often happens, writers want to revisit these characters and the story to which they’ve got this incredibly intense attachment.  I’ve certainly read blogs where writers talk about how they wish they could’ve written a fourth book (or more), only their publisher wouldn’t take it, or whatever.  Conversely, I’ve seen a few reviewers’ blogs—not many, but some—where they say, up-front, that they hope that an otherwise fine writer moves on to something new and different.

I’m only talking about myself here, but I think I can understand both sides to this story: the desire to continue versus the need to let go and leave the story as it stands.  I even understand the calculus of an editor or publishing house.  Clearly, if there truly is more to say—or a series has velocity and a writer has the enthusiasm and more story to tell (I think we all know series where there was no more story, but the series was doing so well, that people just kept coming back to that well; and, conversely, how a series was left to quietly die by a house when the story wasn’t even close to being done)—then, yes, writing that next book makes sense.  In a traditional house, you might even have had that discussion with an editor ahead of time, maybe as soon as you realized there was more to say and do.

But I also think—and, again, I’m only talking about myself here—that, after doing what you set out to do, you have to be able to step away for a little while and just wait a bit.  Be patient; let things settle down and all the emotions even out.  Sure, it’s hard.  It hurts.  You feel awful and even worse when people tell you how much they love what you’re doing (and you’re convinced, as I am so often, that you’ll never write anything half that good again).  But it’s a little like deciding whether you’ll call your kid every week, or leave it up to your kid to decide what she wants.  I have two kids; one likes to touch base every week; the other is perfectly happy to talk for hours, but she’s also fine with zero contact for a good long while—and that’s okay.  I’ve left all that up for each to decide what fits best.  I’m confident they’ll talk to me when I want, and vice versa.

So I guess what I’m trying to say is that if and when a writer feels the need to revisit a series . . . maybe it’s wise to decide if that’s what the series wants and needs, whether you self-pub or go the traditional route.  Obviously, it’s a lot easier to jump into another book if you self-pub; you don’t have to wait for someone to decide it’s okay.

But . . . hold on . . . wait a second: are you doing it because the series is just begging for another book, or you are?  I’m serious here.  See, I said good-bye to MONSTERS several months ago: there was the writing of the book and then the revisions and then the copy-edits back and forth.  A lot of months of getting myself all worked up and then crashing every time I finished the book (again) before picking myself up, blowing my nose, and moving on.  Now that it’s hit shelves . . . I’m having to really focus on not looking over my shoulder, not longing for that series—which feels so much more polished (because it is) than the miserable specimen of a book I’m currently drafting for the first time—and not giving in to the idea/temptation/desire to go back to characters I adore and lives with which I am so intimately familiar.  It’s a real struggle.

Now, is there another ASHES book (or two or more) in me?  I want to say yes; I even know what the fourth book would be about and where I’d go from there.  But will I write it?  No, not now and for more reasons than just one.  First off, I have other people/characters/kids I care about, and their books to write.  But I also understand that returning to the trilogy right this second is seductive because it’s familiar and I’m so comfortable with these kids.  Yet I’m not totally convinced that, at the moment, they’ve picked up the phone; that they’re actually dialing and trying to connect.  Before I return, I need to be sure that they’ve called me because they need me . . . not the other way around.

So, for now, let’s say that the next move is up to them.

***
Before you go: don't forget to enter the Goodreads giveaway for both a signed copy of MONSTERS and a nifty ASHES backpack stuffed with some nice survival gear.  Give my kids a home, why doncha?
Oh, and in the spirit of moving on . . .  a bunch of you chimed in on those profile pics (and thanks; it was interesting to hear how people respond to a picture).  Anyway, as you can see . . . I've changed the pic because, honestly you really do want to stay away from my cheese. Woah, is that a knife in your hand? Cheese is for sharing.

Good thoughts on finishing a series and books, in general. I procrastinate toward the end of any book, my way of being a Klingon (double score for the Star Trek reference). But like you, I move on with "more kids." I feel like Octo-Mom.

I don't procrastinate. If anything, I get more frantic, kind of like I'm on this runaway horse heading for the barn.

I think I'm like you on the procrastination issue. The hard thing is NOT working on it when you want to. And the transition is always a little easier because there's always something else to work on.