Girls in the Crypt

This September, we shot the trailer to the Magnolia League series. Book trailers, it has come to be known, are not overly effective in spreading the book word, but we authors love them because it's our chance to make our beloved books into mini-movies.

It was the most fun I'd had in a while. I worked with a terrific director named Tim Arnold, and some gorgeous actors. It was very, very hot. We shot both at Brick House, a burned plantation house on Edisto Island, and inside a mausoleum at the Edisto Presbyterian Church.


We all had a great day. The actors were gorgeous, the clothes were amazing. We ate BBQ and hush puppies and generally had a good ol' Southern time. But the best part about shooting the trailer? BOTH LOCATIONS WERE HAUNTED.

Everyone on Edisto knows there are ghosts all over the island. It's a Sea Island near Charleston, South Carolina, dotted with ruined plantations and slave cabins. Some of the same families have lived there for two hundred years, including families like the fictional Buzzards in my book, who practice Hoodoo magic and conjure. 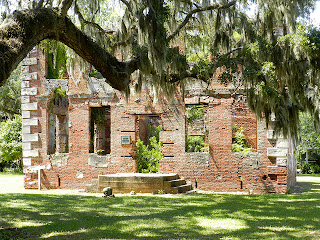 The Brick House ghost is a bride, shot on her wedding night. She grew up in the plantation and befriended a local Edisto Indian, a tribe that inhabited the island before anyone else. He fell in love with her (of course!), and when she went to Charleston to be schooled, he was heart broken. She returned a few years later with a groom-to-be, and the story goes, he was furious. He shot her at the top of the steps, and HER BLOOD IS STILL THERE.

(Or something is there. Probably ketchup from our BBQ. But it was seriously red.)

The second ghost is more famous:. In 1854, a young woman died of diphtheria. The family, heartbroken, buried her quickly in the family mausoleum. Diphtheria was extremely contagious, so the faster they sealed the door, the better. A few years later, her father died, and the crypt was opened again. To their horror, the family found the girls' skeleton, curled up NEXT TO THE DOOR. 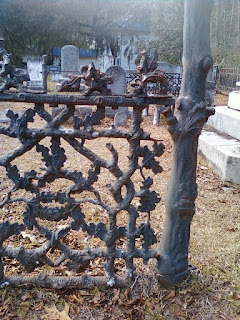 There is actual historical documentation of the second story. Whether the ghost is real or not, I was seriously creeped out. I couldn't even stay for the filming after the sun went down.

For more photos of the trailer shoot, visit http://www.facebook.com/TheMagnoliaLeague.
Posted by katie at 6:32 PM

Email ThisBlogThis!Share to TwitterShare to FacebookShare to Pinterest
Labels: The Magnolia League