I'm running a little short on time this week because of last minute edits on Splintered. So I’ve decided to share an angel reading I had about four years ago (posted previously on my Live Journal blog). 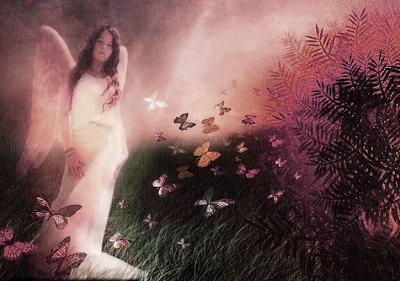 Let me start off by stating two things:


First off, why did I do it? Well, it was kind of a group research thing. A man that used to be in my critique group was friends with an angel reader and she was willing to do a free reading for one of our crit sessions.

Well, seeing as at least three of us in the group were working on books or were going to be working on projects in the future that had angels in them, we decided why not? All in the name of research, right?

So, first we met the lady over pizza. Were you to see her on the street, you’d never have an inkling what she did for a living. She looked like any other attractive woman in her forties. She was a wife, mother, and grandmother. If I had to give a description of her scent, I’d say she smelled like rain. She liked to enter bread recipes in the fair and had won some first place ribbons. That evening, she wore her long, wavy blondish hair down and had on a gorgeous wrap-around skirt in a wispy, shimmery fabric—maybe Dupioni silk?—that she sewed herself. Bohemian chic.

When she started with her “program”, there was no weird voo-doo stuff … no passing of crystals or clacking beads over our heads … no lighting of incense or speaking in otherworldly tongues. She just sat across the table and sketched on a tablet as she looked at each of us for a minute. Then she’d tell us our “aura” color and give a run-down of our health and emotional state.

When she came to me, I was skeptical. She took one look at my neck and said, “Okay, Kumquat…”

(I’d like to take this moment to point out that I’m the only one she used pet names for that night … not sure what it signifies, but just wanted to share that tidbit…)

“I can tell from the shadowing around your lymph nodes,” she continued, “that you’ve had mono in the past.” Holy schmolie. Shadowing?? There’s no shadowing on my neck. But how the heck did she know that? I was nine years old when I got mono (and NO, I didn’t get it from kissing, obviously). But still, that was well over ... well ... several years ago. Ahem. And hmmm.

I inched forward in my chair just a bit, reluctantly intrigued. Next she told me I owed my grandma an apology. I've lost my grandma recently, so this means even more to me now, because although I was visiting her once every summer (she lived eight hours away in a nursing home), I had been negligent sending her cards. I convinced myself that was what the angel reader referred to and actually said it aloud.

The lady proceeded to compound my shame by telling me how much my grandma looked forward to those cards. Ouch. I already knew that. So, she could see into my guilty conscience, too? Again with the hmmm.

Next, angel reader told me that I was anemic. Dumbfounded, I nodded. I had struggled with anemia since my second baby.

“Sugar bear,” she said, “if you would eat more vegetables and take iron supplements, you could control that. Veggies are your friend."

I simply smiled. Surprised once again.

Then she brought out the big guns: “You’re using your cell phone too much when you drive. You’re not concentrating on the road.”

Okay, at this point, I was feeling smug. I'd finally caught her. Back then, I NEVER texted on my cell phone. As a matter of fact, I rarely used my cell phone at all. I was notorious for letting its battery die and forgetting it was even in my purse. So, elbows planted on the table’s edge, I called her on it.

“But you’re distracted by something,” she said. “You end up from point A to B sometimes without even remembering the drive there.”

This is when one of my crit buds chimed in, “She’s thinking of her stories.”

I wrinkled my nose and admitted to Angel Lady that it was true. I often plotted scenes or spun dialogue in my mind—even when I was driving. And there had been times I was so intent on what was going on in my head, I ended up on auto pilot. Not smart.

She leaned across the table. BE CAREFUL. That’s all she said. But whoa. Talk about a wake up call.

She finished my reading by telling me that my aura was pink.

“It means, little Kumquat, that you’re romantic, compassionate, and love to observe life.”

Ah. I sat back in my seat again, hands in my lap, pleased. After all, isn’t that the perfect description for a writer? Grin.

So, that was my reading.

Am I believer now?

Well, I can’t deny the woman knew at least one thing that blew my mind (the mono bombshell). How could she have known something like that? A lucky guess? I don’t think so. She didn’t make that “guess” on any of the other ladies.

Let me just say that I believe that lady had a gift. Maybe she could see “energies” or “auras”, but as to seeing inside my soul? Nah.

Just like a fortune teller or palm reader, I believe she balanced open-ended observations formed by her client’s appearance and then fleshed them out by letting her client’s expressions and reactions lead her. So if nothing else, she was gifted in observing human nature.

Maybe I had circles under my eyes that night and looked tired, thus she assumed I was anemic.

No doubt she took one look at my blonde hair and bubbly smile, and assumed I’m a chatterer on the cell phone.

The grandma issue? Everyone has family issues. Had my grandma already been gone at the time, and had I told her that, she might've said that we’d had unfinished business. At which point my own imaginings would have supplied something from our past that could fall into that slot.

I’m not trying to make her sound manipulative. On the contrary, I feel enriched for having had that experience. What she did for me that night could actually be considered a service. She caused me to look into myself and address some personal issues … to better myself.

Because of that session, I started paying more attention to my driving, eating more veggies, and mailing my grandmother a card more often. Now that my grandma's gone, I appreciate that last one most of all.

Come to think of it, in my case, maybe the lady wasn’t so much an angel reader, as simply an angel.


Anyone else out there ever had a reading of any kind? Did it make a believer out of you? Did it inspire changes in your life?

Posted by Anita Grace Howard at 6:00 AM

Cool post, Anita! A friend and I went and saw a psychic when I was in college. The woman did tarot card readings at a local bar and was known for being good. I didn't say a word during my reading, just a lot of "uh-huh's," and she didn't really ask me anything. If I remember right, I think she said a couple things that rang true, but the one thing I'll never forget was her mentioning the name of my [then] crush--totally out of the blue. I have no idea how she could've known that. CRAZY!

It was a very cool experience. That was the only time I ever did anything like that. I think I'm at the point in my life now where I don't want to know what's going to happen :o)

I don't want to know either, Angela. Now if Simon Baker from the Mentalist wanted to feel my chee, I'd consider it.

Nice post, Anita. And good luck on those revisions.

Angela~ Thanks for stopping by, cute thang. And EEK! That's so creepy how she knew that! LOL

JD~ I'm w/you and Angela both. At this point in time, I'm happy just living day to day and letting the chips fall. Heh about Simon. Girl's gotta have her standards. ;)

I once had my palm read and everything the lady said was pretty much of that variety. I tried not to respond and give any more clues, but I was impressed with her performance! The angel reader sounds pretty cool. (I don't believe any of it, but I contrarily think it's awesome, too.)

Kumquat. That's hilarious. My mom used to call us that when we were being particularly doofy. No idea why.