In a previous post, I talked about writing thrillers. One of things I enjoy when reading contemporary thrillers is that so many of them have a city as a “character.” There’s something about the realistic depiction of place that helps give a thriller an extra “zing.” It most definitely can up the ante. In dark paranormal or dystopian fiction there is some sense of remove. On some level, the reader knows that this cannot happen to them in this moment. But when the setting is an actual place, in the here and now, there is no remove. What happens in the story could happen to you—and that can be more terrifying that a herd of zombies (do zombies hang in herds?).

In both Circle of Silence and dancergirl, the city is Brooklyn, NY. I always go “location scouting” during the writing of a contemporary to find those details that help create the real world. For example, here’s a photo I took of the inside of the gate at Promenade Park, one of the locations in Circle of Silence. 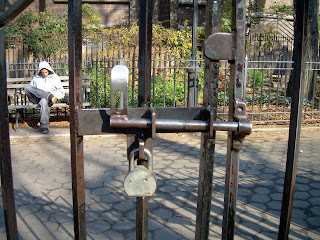 When I visited, it took me awhile to unlock the gate because the latch is on the inside. I then ended up using it in the novel. My main character, Valerie, is investigating a story for the school’s TV News program about a secret society, called MP. She is set to meet an unnamed source inside the park at night. Excitedly, she shows up at the appointed time.

The final minute is taken up with trying to open the gate. Did MP screw up? Did the city lock it early? Finally, it occurs to me that I have to reach through the metal bars, twist my hand and slide the latch from the inside edge.

It’s a tiny, tiny moment but the photo helped me add that extra frisson of confusion in the scene.

Another photo was lucky happenstance. Meandering around the area of Brooklyn known as Red Hook, I snapped this picture. 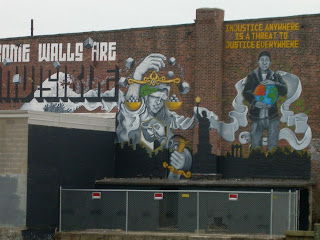 The painted graffiti has two sayings: Some walls are invisible (to the left) and Injustice anywhere is a threat to justice everywhere (on the right).  The entire wall felt so Brooklyn, I knew I’d use it. In my first draft, I described it in great detail: the colors, the actual drawing on the wall.  In a later draft, I had to cut it down because all that detail slowed the pace. So… it’s a bit tricky. You want details but sometimes too many is just...too many. Here’s what I ended up with:

Peeling paint in doorways, overflowing garbage cans. This part of Red Hook is especially sketchy. A graffiti mural proclaims SOME WALLS ARE INVISIBLE.

However, the scrawled sentence resonated far beyond that particular scene. It became a theme that I went back to, not physically, but in the main character's mind. Definitely a happy “accidental discovery!” (Note: The Red Hook I was writing about is the same Red Hook that was devastated by Hurricane Sandy. Definitely NOT a happy discovery).

This last photo is a view that can only be found in Brooklyn. The picture was taken in a small park bordering the East River, with the Statue of Liberty in the background. 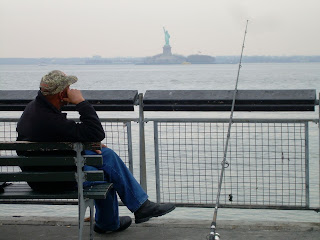 Earlier in the chapter, I describe the view of the Statue and the fence. With a bit of dramatic license, this is how I “used” the picture in the book:

Low laughter gets my attention. Finally! Somebody’s shown up. My heart beats fast. Carefully, I peek around the plant. False alarm. A couple of fishermen, dressed in bulky coats and earflapped hats, carry buckets and poles. I’ve never understood why anyone would eat fish caught in the dirty East River, but it doesn’t seem to bother the men. Casting poles into the water, the two settle onto a bench, content to watch the sun sink into the horizon.

Had I not visited and taken this picture, I probably would not have realized that people fish from that particular part of Brooklyn. It's real, it happens, and I like to think that when readers are reading, they take the leap: if the fishermen are real, what is happening to the characters are "real." So, even though these are short passages, it can give you a sense of how location, location, location, helps create the necessary reality your writing might need!

Posted by Carol Tanzman at 2:30 AM

I love that you research your settings with photos, Carol. It really helps. I do this too and for some books, I've created a Story Behind the Story on my website where I show the pics with excerpts to give a teaser of the book. It's really a fun way to show inspirations behind the novel. Nice post.