Ever hear of a writer by the name of H. P. Lovecraft?

Even if you haven’t, I bet you’ve heard of Stephen King, who called Lovecraft “the twentieth century’s greatest practitioner of the classic horror tale,” and cited Lovecraft’s work as his own greatest inspiration for horror fiction. There is no better blurb in the world.

Lovecraft created a whole mythology of strange and alien creatures that has never truly been matched since his death almost 80 years ago. His most famous short story, The Call of Cthulhu, is a great representation of this as it presents us with a cosmic evil so far beyond our mortal understanding that his mere existence is enough to drive men mad.

Just take a look at this guy’s ugly mug and tell me you wouldn’t lose your marbles if he came to you in a dreams:
Cthulhu is only one of Lovecraft’s many bizarre and haunting creatures, and his images of groping tentacles and internal corruption have inspired countless movies, books, and games. In fact, because Lovecraft died without heirs, his writings and his mythos are public domain, making them free to read, adapt, and update.

In fact, there is a whole cottage industry built around bringing Lovecraft’s works to life in the 21st century. Anybody who knows Lovecraft can see his ideas popping up in some of the greatest horror films of all time, like the Necronomicon in The Evil Dead and the shape-changing alien in The Thing.

The H. P. Lovecraft Historical Society has also directly adapted some of his best stories into very compelling movies that mimic the silent films of Lovecraft’s era. In fact, there’s even an annual H. P. Lovecraft Film Festival in two cities.

There’s another side of the Lovecraft fan world, though. Here, Lovecraft’s beasties are treasured as funny and cute. In fact, the more nightmarish the original, the more people want a cute-ified version. Take this little plush Cthulhu, for example: 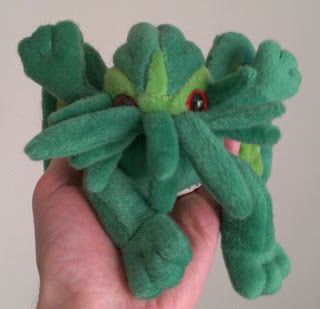 I’ve seen Cthulhu bobble-heads, funny shoggoths and fish-men t-shirts, and even a plush Necronomicon complete with fuzzy teeth (presumably to consume the fuzzy souls of any teddy bear who reads it). One of my favorite spoofs is a set of mythos holiday songs such as “Death to the World” (sung to the tune of “Joy to the World”) and “Harley Got Devoured by the Undead” (to the tune of “Grandma Got Run Over by a Reindeer.”)

And then, of course, there’s my SUPER soft and fuzzy Cthulhu pillow, whom my cat loves to snuggle with: 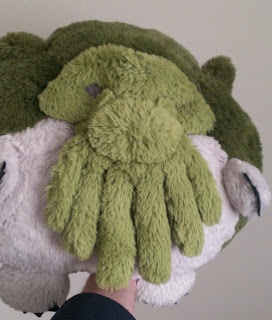 My question is whether these two approaches can exist together. Can Cthulhu be both horrible and huggable at the same time?

Personally, I like both versions, but I have a friend who hates the cute stuff. He says it undermines the intended experience and draws the life out of one of the most interesting mythologies of the modern world.

Maybe he’s taking this whole thing too seriously. Or, maybe my laughter at “Cute-thulhu” is really just a psychological defense against the horror.

Even if you’ve never heard of Lovecraft before now, I wonder if you, gentle reader, have ever had an experience where you enjoyed a cute spoof of something harsh?
Or, have you had the opposite experience, where the seriousness of a book or movie was undermined by a funny parody?

In short: how do you Cthulhu?

Great post, Sechin. Having a fuzzy Cthulhu would be like owning a Freddie Krueger Ken doll or someone putting a Charles Manson helter skelter pillow on the market. This notion struck me as a defense mechanism to minimize the horror, but it would be no different than products like severed finger soaps or bath mat towels that bleed when you step on them. Lovers of horror and crime fiction or people fascinated by serial killers *shiver* would love this stuff. So why not a Cthulhu plushy for your cat? Homage is homage and there will always be someone with a dark sense of humor who likes macabre collectibles.

You've got a lucky cat btw.

Thanks, Jordan!
I sometimes worry that my cat is conspiring with Cthulhu, though...

Cats can't be trusted. If you died locked in your house, they would eat you. Just sayin'