I have a confession to make. I don't really like Willy Wonka and the Chocolate Factory. In fact, I enjoyed the Tim Burton/Johnny Depp version more, other than those horrible songs.

Before you pull out the tar and feathers, hear me out. I didn't grow up with the Gene Wilder movie. In the days of VCRs and lousy cable television, that was one movie my family never got around to watching. So it wasn't until AFTER watching the Johnny Depp version and my wife telling me how it paled in comparison to the Gene Wilder version that I finally watched it.

Let me just say that I was underwhelmed. In fact, I wasn't even close to being whelmed. From "Cheer up Charlie" to the obvious sound-stage look to the factory, it just didn't do anything for me. And as creepy as Johnny Depp was, Gene Wilder was much stranger/creepier to me.

I mean, look at this guy:

That part was in the movie, right? My point is that the movie was just strange and didn't do anything for me on an emotional level. But if nothing else, it's responsible for the Condescending Wonka meme, which is actually quite enjoyable. 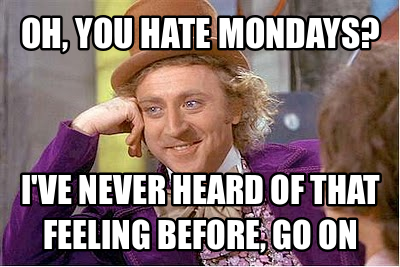 I might be alone in my Wonka feelings, but how about this? You go up to a couple of your friends who are laughing about something. They tell you why, and maybe you give a courtesy laugh because it's really not funny. But to them it's hilarious. And one of them says something along the lines of "guess you had to be there."

The point is that just like events in our lives, the stories we consume are often rooted to the time we watched/read/listened. Is Alf a good show? Probably not. But I grew up with it, and even if it doesn't hold up, you can bet I still have fond memories of it.

I'm 34 years old. I'm married and have kids. I even have a 401k, as ridiculous as that may be. If I picked up Jack Kerouac's On The Road for the first time today, I might think it was interesting, but I guarantee it wouldn't connect with me the way it did when I was 21. It's one of my favorite books not only because of what's inside it, but also because the first time I read it I felt like Sal Paradise was talking to me. It made me want to take on the open road. And I did.

The same goes for something like Harry Potter. While it definitely holds up, there was just something special about reading those as they came out. I will always remember the anticipation and excitement of picking up a copy of Deathly Hallows at midnight and reading if straight through. My 8 year old son is reading the Harry Potter series right now, and although he's loving it, I don't think he'll have quite the visceral connection to it that I do. But it's all right. He's going to have his own Harry Potter. He's going to listen to music that makes me do this:

And that okay. That's just how life works. I just hope my kids find books and movies and music that truly speak to them, so that when they're ancient like me they can look back fondly and draw from those experiences. Because the right stories at the right time can change your life.

I love this post, Dan. We often don't realize how some things impact our lives until we see or hear or taste them again and get transported to our past as if we were in a time machine. Music does that for me...and some foods can trigger a nostalgic attack.

So when your kids dye their hair or get a piercing or tattoo, will you chalk that up to memory making? Man, I remember my rebellious self. Oy!

Thanks Jordan! Music definitely does it for me too.

Haha. I'm totally fine with crazy hair dye/hairstyles. Piercing and tattoos, not so much. I do cringe when I think of what kind of music they're going to rebel against me with :)

You're a cool dad. You'll survive. My niece dyed her hair green recently. Not by choice. More from not understanding primary colors, but in solidarity, I had my hairdresser put feathers in my hair. Always remember to laugh...and never forget the value of a well-placed feather.