This is a story about bees and coincidences and the hivemind. 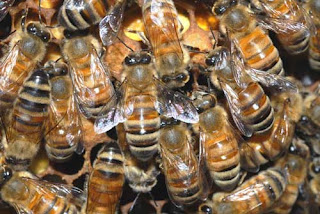 When I pulled in the driveway  an old man was crouched over the giant section of tree that had fallen in our yard. I could just see his profile, hooked nose, thinning hair, ratty t-shirt tucked into pants a size or two too big. As I got out of the car I could hear him talking, but I couldn’t make out what he was saying. On the thin blades of grass by his feet was a metal contraption that was shaped like a genie lamp with a bellows on the end. He picked it up, held it over the trunk, and worked the handle until a small grey puff drifted out .

I hurried to where he stood. This had to be the Bee man who’d come to save the insects in the fallen section of tree. It was so heavy, 600 or 700 pounds I guessed, that it cracked the cement driveway when it fell. Now the tree hummed with disturbed bees. A narrow channel of honey trickled down the drive; a cluster of  bees was busy licking it clean. Do bees have tongues? I didn’t know, but I aimed to find out.

When the old man saw me he nodded his head and told me to back away while he cut a window in the wood. The bees would likely come swarming out fierce and angry, intent on stinging. The smoke made my eyes water. I backed away. I noticed that a few bees had attached themselves to him. One crawled on the brim of his hat, two clung to the back of his t-shirt and another sidled up his bare arm.
As he cut open the wood, a sweet incense-like smell wafted out. I wasn’t sure if it came from the bee comb or was the natural perfume of the tree. Inside the tree glistened with golden honey comb and the sound of the bees grew louder. Thousands of bees, bodies on top of bodies, crawled over the surface of the comb, one buzzing, shifting mass. Suddenly I itched all over. Just by observing them, I could feel bees crawling through my hair, on my neck, in my bra.

Of course there weren’t any real bees on me at all. But the power of suggestion was strong. At that moment I had a small aha. I pictured the human mind like the inside of a hive, thick and buzzing with ideas. I looked at all those bees working together on a common task and communicating in a mysterious way. I thought of the term hivemind. There are several definitions but this one from the Urban Dictionary caught my attention: “Hivemind is when two or more people come to the same thought at the same time…”
You know how it works. You come up with your next book idea, maybe even write the manuscript and then discover several other writers have been having very similar thoughts. An editor told me recently that he took home three manuscripts over the weekend and that all three had something to do with unusual telepathic connections. If you’re very lucky you’re at the top of the hive. Memes move through the culture.  A scientist comes up with an invention and that same month several similar inventions appear. I don’t know how, but hivemind seems to happen in every creative field.
I do know the Bee man’s going to make an appearance in one of my books. I’m fully expecting bees to be the next big trend. So I’m stating it here, first.

I invited Screenwriter over to see the spectacle and he’s already started on a horror script involving bees. He sent a friend get to film footage last night. But here’s the weirdest thing, the hivemind moment…SciFi guy was on vacation across the country when the bee situation began in my yard. He didn’t know anything about it.  He went to bed one night and heard…buzzing. Several bee hives were hanging inside the window of the room where he was sleeping.  Twilight Zone music please.

Ha! Your bee-ologist sounds like an interesting fellow. Certainly worthy of becoming a fictional character.

In my series, THE HUNTED, with HarlequinTeen, I have psychic kids being hunted by a fanatical church on the streets of LA. If you query "Indigo child" or "Crystal child" on the internet, you'll get millions of New Age sites dedicated to the idea that the next evolution of man is walking among us. This very real notion was my inspiration to write the series. And yes, the hive mind is part of these stories.

I love the idea that fictional stories can come from Nature or animal/insect behaviors. You are on to something.

Sounds intriguing, Jordan! And yes, I'm pretty sure the bee man will show up in a story. I have a ratcatcher in Beyond the Door (Amulet Mar 2014) based on another real character who helped us remove some unwanted skunks!

Just this morning, I was listening to a podcast that bees neurons make ten times as many connections as our own (though we have many millions more in total). It's fascinating what life forms can do when they work together, and as our technology connects us more and more closely, maybe we will approach a hive-mind of our own!

When the natural world drops an old tree branch crammed full of honey bees in a writer's front yard--this is more than a random event. This is a summoning. May we all be so lucky! Great post.