My Brain, On Fear

I am a great believer in dreams.  Being a shrink, I guess you'd say it's in the job description.  I don't hold much stock in dreams as prognosticators of the future or omens.  The work our brains do whilst dreaming is both necessary and highly individualistic, and by and large, I look forward to dreaming more than I do sleeping.  (By the way, those who, like me, moan about just having to sleep because it's such a time sink and complete waste when you could be doing something much more important, like working?  Consider this: a new hypothesis suggests that while your brain is feverishly filing away the day's information, it is also restoring your brain cells to a sort of baseline set point.  Without this activity, argue UW-Madison researchers Giulio Tononi and Chiara Cirelli, your brain would be unable to encode new information.  You'd not only run out of storage capacity; your cells would pretty much crump because, as hard as they work during sleep, they must work even harder to soak up and react to all the stimuli you throw at them during any given day.)

So, okay, fair enough: I'm convinced, although I didn't need a scientist to tell me I ought to sleep.  It's the time I mind.  On the other hand, without sleep, I wouldn't dream quite so much.  So I guess it evens out.  (NEWS FLASH: Go without sleep long enough, and you'll get breakthrough REM whether you like it or not.  It's unpleasant, sometimes scary, but your brain is only trying to save itself, bub.  So forget the all-nighters already.  Your mother was right.  Get some shut-eye and dream the way your brain was meant to.)

All this is by way of prelude to the dream I had last night or, much more likely because it is still so vivid, in my last REM cycle this morning.  (Oh, Ilsa, you can make everything so science-y.)  Like I said, I pay attention to dreams; my husband pays attention to his, too, mainly because he figures I'll interpret them in a way that makes sense.  Usually, I do, but only because I've known him a long time.  (And it's the same with a patient.  Anyone who tries to tell you what your dreams mean without getting to know you very well and for a really long time--in relative terms, that's about three, four months of intense talking--is full of it.  You'd get more out of a Magic 8 ball.)

My dream this morning felt very long and probably lasted less than thirty seconds.  I remember only the pertinent stuff: I'm in a marriage that isn't working with a person (I won't say what sex, but that was interesting, too) I'd never have married in a million years.  I was uncomfortable and knew it.  We're in a house that I'd never have chosen in my life, and it's a primitive thing.  We have to grow our own food, make our own furniture . . . I remember taking a carving tool or an axe to a chair, I think; I say that because I remember that the back was a hollowed oval.  I was making a mess of that chair, whittling off big ol' chunks and thinking, This doesn't look remotely right; this isn't going to work.  In the dream--right before I woke myself up--I thought, There has to be an easier way.  Why can't I go live somewhere I've been before, where I'm way more comfortable?

I can think of two possible interpretations for this dream.  There might be more, but it's the same thing when you say the right thing to a patient at the right time: everyone calms down.  They know you're right, and you know it.  The tension bleeds away; there's that little mental ding.

So this baby's got two dings.  One . . . I can't talk about just yet.  I'd like to; I know exactly what's going on here and in fact, I was going to blog about it.  But I have to wait.  Stay tuned, and in two weeks, I'll tell you because it's an interesting topic and interesting times and we might all have to deal with this sooner or later.

The second, I can.

Freud said that the house in a dream represents the dreamer.  For me, I'd say he's right; just ask me about the doozy of an ooky nightmare I had right before my first visit with my training analyst: Creep City.  But I will also admit that I might be primed to believe that way.  I'd read The Interpretation of Dreams well before I stared at the acoustical tile of my analyst's ceiling for several years.  So if that's what the great man said, that's what I thought was true.  In part, I think we all know that Freud was a product of his times.  Not everything he said was right, but then again, not everything he said was wrong either.  My guess is people put a lot of stock in their houses; a house is the face the public sees. We make all sorts of assumptions about people on the basis not only of where they live and how but what their house looks like.  Think about it a second, and you'll see the truth of that.  Houses are clothes, on a larger scale.

But I also think that if cars were something I really grooved on--and I sometimes moon over a classic muscle car until someone shakes me--I might dream of being in a car I would honestly never drive.  It just all depends on the person.

So, the dream that I think I've got figured: it's really kind of straightforward.  I'm now in the middle of writing something in a style and way I've never done, ever.  I'm pushed way out of my comfort zone.  This thing is a huge challenge--but I also put myself there, deliberately.  I did it in the way I ended one book because that would force me to try something I've always thought I just might not be able to pull off--and working on this book now--horror/historical/sf--is the strangest thing because my brain is fighting itself.  I'm always holding myself off at a little bit of a distance, looking at the shape of thing, listening to syntax, trying to use the right language and slang.  My critical brain is active when, normally--or after a certain point when the characters are talking, and I've butt out--it's absolutely operating way in the background and so quietly, I only understand it's there when I get up, walk away from the book for a second--and then do a head slap because, DOH!  Ilsa, you idiot, you need to write it this way.

MONSTERS was a tad like this.  What with all the storylines and characters, it took me some time to build up a head of steam.  I think I wrote something like . . . a hundred pages?  one-fifty? . . . that ended up being shredded and I had to start all over again.  There are literally hundreds of pages on the cutting floor here.  Thankfully, my memory seems to be short, but the husband tells me I fretted about that book up to the last keystroke, wondering if I was getting it right.  I do know that every POV shift, every new chapter,  each scene felt like the beginning of the next uphill run--and there was no downhill, it seemed, ever.  I knew when I was done that it was fine and more than fine--and even, my editor made a few suggestions that ended up putting back some of the pages I'd slaughtered.

This book is similar; it feels much harder probably because it is, and I'm not known for easy formulas anyway.  The thing is a challenge; the concept is way out there.  So my dream-brain is screaming for me to cut it out; give it a rest; give it up and do something familiar.

Now, I won't say that even the familiar is "easy."  As I remind anyone who turns his nose up at work-for-hire in other universes: Look, bub, every word, every line, each story was original.  So what if the book featured Kirk and Spock or Seven of Nine?  There was nothing easy about it and I did it all from scratch.

So this dream is about my worry that I'll fail.  I get that.  What is so funny about my dream is that I believe that I will fail with every new book; that the book I just finished is the best I could possibly do and I can't ever do half as well again.  In some ways, that's correct because I write the very best book I can at that moment; I don't do halfsies.  Who, in their right mind, would?  That's why I can't answer questions about what I'd change about a book if I could go back and do it again.  I can't ever do that book again in quite that way because I will never be the writer who did that book back then.

So, great.  I know what's bugging me; well, that is, I've told you part of it, and I'll tell you the rest in two weeks.  The insight doesn't make me feel much easier.  There is nothing magical about this, no aha moment.   A correct and honest interpretation won't make my anxiety go away.   It's like Tiger Woods, I guess: it's about grinding it out, baby.

In the end, I think this New Yorker cartoon sums it up best (and apologies for the shadows): 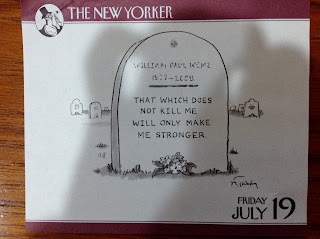 Stop by again in a couple weeks for Part Two.  Interesting times.﻿
Posted by Ilsa at 12:00 AM

I rarely remember my dreams, which could be a good thing.

Considering the way mine have been going . . . might be a good thing :-) But a little self-knowledge is a useful tool, too.

It's tough to walk the line between too much anxiety (which is paralyzing) and too little (which is enervating). I hope you can use your dream as a gauge to keep you at the right spot!