Why Sci-Fi is so often pessimistic

Name 10 sci-fi books or movies and I'll bet at least 7 of them are pessimistic. Post-apocalyptic worlds (e.g.: The Hunger Games), overwhelming threats to humanity (e.g.: War of the Worlds), dystopian societies (e.g.: Divergent), and inventions with unintended consequences (e.g.: Frankenstein) are the stock and trade of the science fiction writer. Why are the stories of our future so negative? 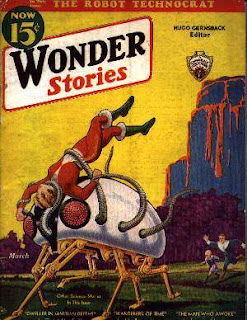 I blame evolution. We evolved to be intelligent creatures with the ability to learn from others and anticipate the future, and that influences how—and why—we tell stories of danger and darkness.

Imagine our caveman ancestors living in a world surrounded by deadly predators. If one of them wandered into a cave and got eaten by a saber-toothed cat, the other members of his hunting party had the ability to tell the story to warn others away. Those who paid attention lived, and those who didn’t ended up as smilodon kibble.

We are the descendants of people who survived in part because they told and listened to stories. Science fiction writers often make their stories frightening because they know we are instinctively inclined to listen to warnings about the bad things that could happen.

Science Fiction Dangers
Sure, most of the dangers portrayed in science fiction aren’t as immediate as saber-toothed cats were to our ancestors, and they’re even less realistic: deadly arena games, genocidal space aliens, and zombie hordes aren’t exactly the leading causes of death in America today. Yet hidden away in these scenarios are warnings and survival strategies for real-world problems.

Science fiction has the power to make us aware (even if in a metaphorical way) of the dangers of damaging our environment, the evils of dehumanizing an enemy, or the dangers of a totalitarian state. And the zombie apocalypse? Well, if you’re prepared for that, you’re ready for the less-awesome but much more likely event of an earthquake or hurricane. (Even the CDC (Center for Disease Control and Prevention) recognizes the power of zombie stories to encourage people to prepare for any disaster, undead-related or otherwise.)

Trouble is, all this adds up to a pretty pessimistic view of the future. If you read enough of these stories, the glass won’t seem half-full, it will seem cracked, drained, and ground into silicon used to make killer cyborgs. Pessimism makes for great stories, but is there a way to escape the negativity?

Yes. Probably the most famous example of optimistic science fiction is Star Trek, which presents a society that has solved the problems of racism, poverty, and nationalistic war. Maybe more authors could experiment with portraying a future so bright it’s worth fighting the Klingons to preserve.

Science fiction can be optimistic when it follows the ancient mythological pattern where the hero travels through unknown lands to bring back a boon to the rest of humanity. We can see this idea in a few science fiction books, such as Robert Heinlein’s YA classic “Have Space Suit, Will Travel,” in which Kip Russell battles tentacle-faced aliens and returns to Earth with scientific secrets that will unlock antigravity and faster-than-light travel. This idea of a “science boon” is where I hope to go with sequels to Mad Science Institute. I would love to see other authors pick up the torch here, too, and have a hero who returns with more than just the head of the hive queen.


None of this is to say that we should shun pessimistic science fiction. It’s fun, interesting, and sometimes deeply important to our society and our future. But if you’re a writer or a reader who feels like you’re not seeing any new ideas in the post-apocalyptic or space-war genres, well, maybe that’s because we’ve been walking down the same dark paths for too long.

I'm an optimist by nature, so maybe the pessimism inherent in most sci-fi stands out to me because it contradicts my expectations for the future. I also like to think I'm a realist because I know we don't have any guarantees to continue as a society or a species, and nature is unforgiving. Just ask the dinosaurs.

What do you think? What are your favorite science fiction stories/books/movies, and do you think they're pessimistic?

Email ThisBlogThis!Share to TwitterShare to FacebookShare to Pinterest
Labels: Hunger Games, science fiction, YA, YA lit

Great look at Sci-fi. Speculative fiction (which Sci-fi is a subgenre) is an up and coming trend Publishers Weekly did an article on. PW called the article YA MASH UPS, saying that weird Sci-fi science mixed with a relatable romance that kept the story grounded were a notable trend in YA.

The last Sci-fi I read was Ernest Cline's READY PLAYER ONE. Loved it. It had a bleak pessimistic view of our future, although it didn't dwell on it. It was a backdrop for the story centered on a young guy's search within a game for clues to a dead man's fortune. Very cool...and strange.

I suppose I'd like to read stories of man overcoming a bleak future by sheer force of will and the human spirit, but I'm an optimist by nature.

I like Ready Player One too, but perhaps my all time favorite SciFi is The Sparrow by Mary Doria Russel. I think the reason I'd choose this one is why I always love a book,the characters. Even on a series like BSG, what keeps me coming back is the characters, many layered, never perfect characters. Now I also love intriguing ideas,and the two combined will win me over every time.

Russell's book is in my debut authors collection. Loved The Sparrow.