The Rise of Convention Culture

Recently I had the pleasure of attending Gen Con, the largest gaming convention in the world. Over the past two or three years, convention culture has absolutely boomed in this country—thanks, at least in part, to the massive box-office success of Superman, Batman, and The Avengers, as well as the hat-trick of the Walking Dead, Big Bang Theory, and Game of Thrones bringing traditionally nerdy topics into the living rooms of otherwise non-nerdy people. 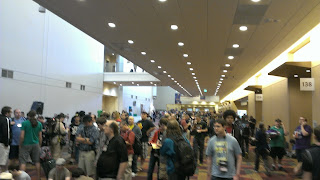 Con popularity is skyrocketing. Gen Con, for example, has been breaking turnout records year after year, with more than 49,000 attendees this year. At the same time, big-name stars are holding panels and signing autographs at Comic Con. Even little cons are becoming big: I have a friend who started a tiny, local affair called Kokomo Con, and after only a few years he now draws visitors, vendors, and celebrities from around the country.

Conventions like Gen Con are a great place for writers, too, because it’s a wonderful chance to meet your readers. And when you’re not signing books, there’s a world of other activities. 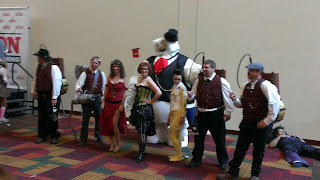 Costumes are always fun to watch! This year, adding “Steampunk” to a concept was popular. Take, for example, the Steampunk Ghostbusters. It’s the Stay Puft Marshmallow Man with a mustache and monocle that sets this group over the top. 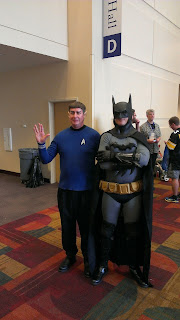 I would watch this sit com! I can just imagine it.
Spock: Please explain the logic behind tying up this criminal and hanging him from the kitchen chandelier. Why would you do that?
Batman: I’m Batman!
queue laugh track 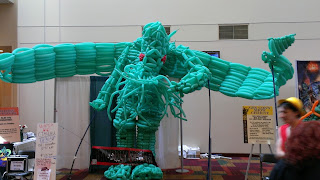 Balloon Cthulhu: Full of fear and light as air! This thing was 10 feet tall. It’s creator could get under it and walk it around like a gigantic marionette. Ia! Ia! Squeaky inflatable Great Old Ones! 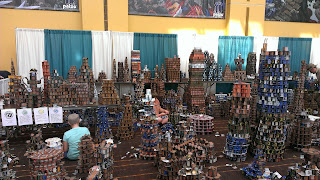 Cardhalla: This was constructed entirely from donated playing cards. For three days, anyone who wants to join in can help build this massive card metropolis. On the fourth day, everyone throws coins to knock it down (with the first tosses being auctioned off). After the mayhem is complete, the cards, coins, and auction proceeds are all donated to charity. Last year, this bit of madness raised more than $2,500 for good causes. 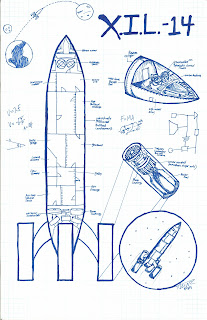 Here is one of the drawings I made to decorate the booth. It's been years since I've drawn anything and it kind of set me into a doodling craze. I haven't been able to stop sketching things since. 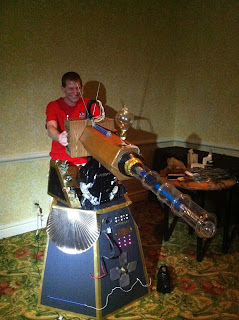 Death ray: Of course, I couldn’t resist testing out a few props. This one was build based on a game I helped design, so I got special “mad scientist” privileges. Grinding the panicking populace under my iron heel was never more fun!


Okay, those were a few of the highlights. Can’t wait until next year!

Be good, and dream crazy dreams,

I must say, that balloon Cthulhu is amazing! Fantastic post Sechin!

I have a comic con coming up toward the end of this year and I am stoked after your post, Sechin. Man, what will I wear? Hmmmm. Great pics.

Jordan, you should go to the makeup section of your local Halloween store and see if you can turn that zombie-face app picture you posted into a reality!

That, or a cthulhu balloon is always a good option. :)