A few days ago I had the opportunity to visit my alma mater, Carleton College, for the first time since I graduated more than 15 years ago. As anybody who’s been to Carleton could easily guess, I borrowed heavily from my college’s geography and culture when I created Langdon University for my novel Mad Science Institute.

This tour of campus was, therefore, as much an inspirational outing as it was a stroll down nostalgia lane. As the saying goes: write what you know. I wanted to check how well my memory lined up with reality. It turns out, there were some staggering differences. 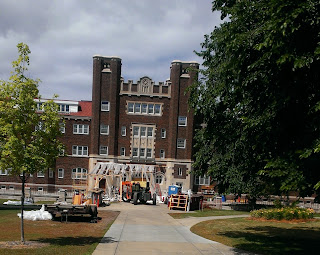 Sure, the central buildings of campus looked absolutely untouched by the passage of years (Wish I could say the same for myself!), such that the minute I walked through the doors of Sayles-Hill (the campus center), I had an urge to rush over and check my mailbox.

Likewise, the dormitory where I lived for two of my four years was still as I remembered it: isolated at the far outskirts of campus. As it always had been, it was a hike to get there, but a hike with great scenery. 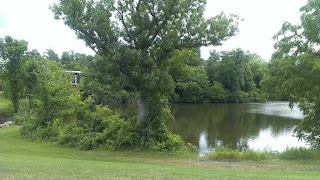 On my way back from my former dorm, I walked into an area I felt like I had never seen before. There were entire collections of buildings I didn’t remember—some of which were new, but a few had been there in my time yet sparked no memories for me. I simply hadn’t had a friend in this dorm or taken a class in that building, and therefore it had faded from my memory. 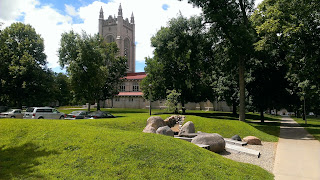 In the background is Skinner Memorial Chapel, where we used to go into the basement and play Sardines and Hide-and-Go-Seek

It was strange to think that so much could have slipped out of my head. I’d like to think that shuffling those memories off stage made room for new ones, but it doesn’t really work that way. What is true, though, is that the most important memories stick around. I know they do, because I could still point to a tree we always used as a goal in for Frisbee golf, and to the windows of each of my dorm rooms, and to the exact spot on the shoreline where my roommate fell into the lake. Good times.

Not too long ago, I finished the beta draft of the follow-up to Mad Science Institute, and this new novel goes even deeper into the fictional Langdon University’s quirks and culture. As far as writing goes, it’s a good thing that so much had changed at Carleton over the years and that my imagination had altered even more, because that Langdon University and Carleton College aren’t the same place, nor should they be. For one thing, using Carleton as an inspiration rather than a firm setting freed me to pick the best of the old and the new, as well as mix in more from the outside. Still, if you’ve ever been to Carleton, keep the campus layout and lore in mind and you might start to see where many of my ideas came from. 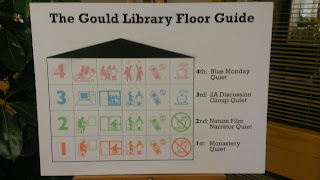 You can't make this stuff up. The ground floor of the library is actually the 4th floor, and you descend into the progressively quieter levels from there. (Blue Monday is a coffee shop in town)

Memory can play so many tricks on you. I’m curious to know if anyone else has had an experience of returning to a well-known place after many years. Did it seem smaller in person? Had it undergone new construction? Did you feel like you could just walk right into your old living room even though you hadn’t lived in that house for years?

What kinds of tricks has your memory played on you?


Be good, and dream crazy dreams,

Congratulations on finishing book#2, Sechin. Can't wait to see what Soap does next.

No matter how you try to capture a real place, the reader will always "see" it through their experiences. Going back to campus is great for capturing the feeling of the place and taking pics like you did. Thanks for sharing.

Thanks, Jordan! It's fun to do that kind of trip, and also important to keep the creative juices flowing.