I've got covers on the brain.

Right now, we're pondering SHADOWS covers. I've seen the artist's conception for the ASHES paperback. My Spanish publisher sent me their version for ASHES; my Bulgarian editor was also in touch just recently. In fact, a couple days ago, my splendid agent, Jennifer Laughran, tweeted a picture of the Hungarian cover. Apparently, it kind of freaked her out because she saw only that face, in very low light. 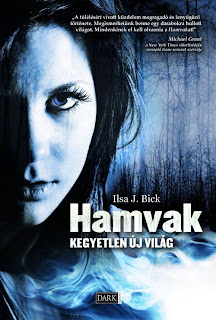 Anyway, that got me thinking about covers, in general. I am the first to admit that I have my own ideas about what an ideal cover should be: neither boring nor derivative and a story in its own right. The cover should give the reader a hint about what's in those pages. But a cover should also be eye-catching. (Note that I didn't say "appealing;" some very gruesome covers are incredibly powerful.) A cover can also be a truly splendid work of art as in this Scribner stunner for Stephen King's UNDER THE DOME.

I am so in awe, you can not imagine. And, of course, this being Stephen King, the UK paperback gave you a choice of six different covers, five of which focused on a particular character. Seven, if you count the signed limited edition. 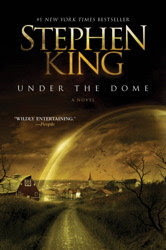 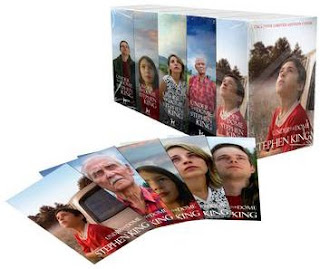 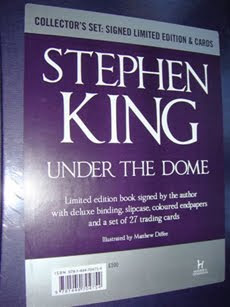 Covers come in all flavors. Some are stock images jumbled together. Some could serve as an image for just about any book. (Be honest: how many covers have you seen which show two kids, in silhouette, running across a horizon line/field/hill, etc.? Yeah, I thought so. A ton.) Others are quite unique; they could never be used for or represent any other book.

Now, I remember a few months ago hearing an author badmouth her publisher--in a public forum, mind you (a real no-no, if you ask me)--for picking stupid covers, never including her, and on and on. I kind of wanted to say something mildly snarky like, Do you know how many people would kill to have their books published at all, you idiot? But my mother raised me to be very polite. So when it came my turn to comment, I told the truth: my publishers have ALWAYS asked for my input on a cover. ALWAYS. For them--and me--it's a collaborative process just as important as any edit. I remember the back and forth for DROWNING INSTINCT, which just came out at the beginning of the month. My goodness, I think we must've gone through at least ten or twelve ideas, and those were only the ones I saw. What I find really interesting is that the cover which made the cut . . . I wasn't that wild about it at first. I guess this was because I was still in ASHES-mode, where we were trying to get away from a character-driven cover. So this one for DI . . . I worried. But you know what? Everyone else who saw it loved it--and now that I've had a chance to step back, I agree. This is the perfect cover. 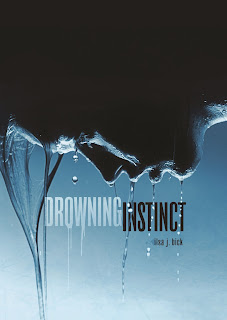 Which only goes to show what I know about cover design.

And that got me thinking about the various incarnations and regional variations for ASHES.

The original cover--which I again came to like quite a bit--was very character-driven. 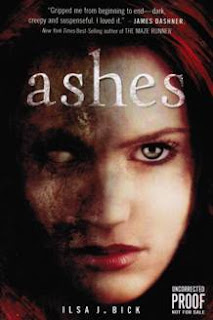 Me? My initial response? Uh-oh, now everyone will think it's a zombie book. Anyone who's read the book knows that's, well, not quite accurate. What I worried about was that the cover might be promising something the story itself wouldn't deliver. (And, boy, did that creepy fish-belly eye get to me.) Not that there isn't plenty of mayhem and gore and enough chowing down for the most voracious carnivore . . . but the vision being presented wasn't quite right. My editor and I went back and forth a couple times; my agent--much savvier about these things than I--weighed in; and bless his soul, my editor sent various versions incorporating some of our suggestions. In the end, though, they went with the image for that BEA ARC.

If you've been paying attention, of course, you know by now: that particular image didn't truly make the final cut. Rethinking the cover design was a stroke of genius on my editor's part because he understood: the ASHES story is much bigger and broader than a single girl. We all wanted the cover to reach its intended audience, too, not just girls but boys and young men for whom a great adventure cuts across gender.

So, finally, they came up with this. 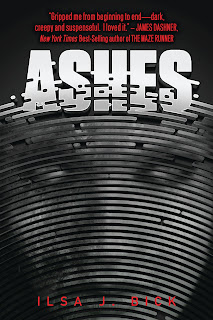 My first response? UGH. But not ugh, how horrible: ugh, how creepy. This cover has it all: the EMP pulse that destroys the world; that really ill-defined, mysterious and MONSTROUS face which could be anyone and anybody (sort of the point of the book; not all the monsters are brain-zapped, after all). So I thought they really nailed it.

But, you know, everyone has their own taste--and so do different countries. I know of at least one website which ran three covers, not only the final US version, but the UK 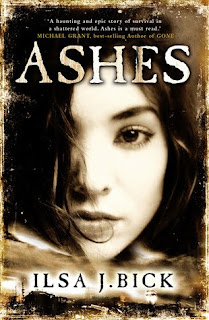 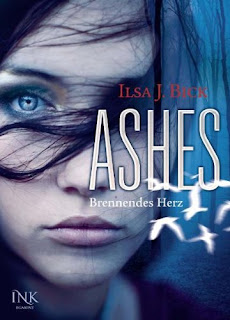 Really different, huh? I was surprised, but I also came to appreciate that every publisher knows his/her country and audience, how to reach out to them, make them want to pick up a book. Not surprisingly, folks from the respective countries liked their version better than another's. Bulgaria chose to go with the US version: 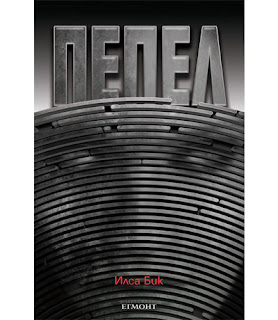 Spain's cover is different again--and wouldn't you know, I've misplaced the darned thing. I mean it. The email has vanished; I'm just so pissed! (I know, I know; I'll eventually track it down SOMEHOW and post.) But I do remember that the cover was a very intense, deep orange-red with two silhouettes: the taller girl is clearly Alex, and the little kid with pigtails (and a teddy bear) is Ellie.

As I said, right now, we're in the middle of working on the cover for SHADOWS which comes out later this year. I can't tell you anything--much less show you--but while it is different from the final US ASHES cover, it is somewhat similar to what's being planned for the paperback version of ASHES. So perhaps the idea is to go for a certain common "feel," I don't know.

But I am curious: what are your ideas about covers? What goes into making a "good" book cover anyway? Should they be actual works of art (as, for example, the Whelan covers for King's THE DARK TOWER series)? Are book covers art? [My vote: only the really good ones ;-) ] Should covers tell a story the way, say, this one does for King's 11/22/63? (Three guesses who I think tells a pretty great story.) 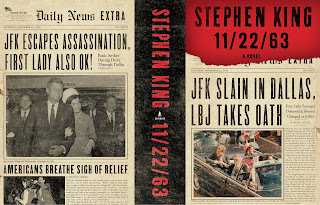 And do you have cover stories--good and bad--of your own? Bring 'em on.

Before I forget, the winner of the DROWNING INSTINCT giveaway is Melanie Goodman! Having already read the book--and given it a lovely review--Melanie said she's giving it to her mom for a read first. To both, enjoy! To all those who entered, thanks. And for the many, many overseas fans who would have LIKED to enter . . . stay tuned. I feel a Goodreads giveaway in our future :-)
Posted by Ilsa at 12:00 AM

Thank you SO much for sharing that! I almost never hear from a writer regarding their covers, except to say they have no input in it. Honestly a cover will compel me to pick up a new book more than some stranger's review will. I prefer character-driven covers, but ones with something intriguing/haunting about them (like yours for Drowning Instinct, actually). And color- I've noticed I am drawn MUCH more to colorful and vibrant covers than B&W or sepia tone covers.

Love your post, Ilsa, and all the many versions of Ashes (which I loved too as you know). I find foreign covers are amazing and so different from the US packaging. They definitely can reflect a culture.

I've never had as much influence on my adult or YA covers. My publishers always ask for my initial input. Usually they ask for cover concepts from either released books or art that describes the story. I've recently had more luck influencing them on art and I like to use images I've found on the website, DEVIANT ART. But once they have a concept that gets a thumbs up from Sales, there is not much changed and that's when I usually get my first look. If I take issue with anything, I usually don't get much say, but ultimately it's a packaging business decision for them and I have to respect and support their choice. At Harlequin Teen, they have teen panels that get advance looks and give feedback before they make their committee decisions, so it's a process.

Covers are VERY important. And in a digital age of thumbnail sized covers, the artwork must translate well on that smaller ebook visual scale too so simple designs must be considered. I'm hoping to get my backlist rights reverted to me soon for some of my books. That's when I'll have complete say on the cover. We'll see how I do.

You're welcome. I think about what gets me to pick up a book--if I don't know the author, let's say--and cover is definitely right up there. I'm not sure what makes me respond, to be truthful. Certainly, you can tell a lot about content from cover art done well; a middle-grade book is SO different from Dr. Seuss, for example. So are we talking a degree of artistry here? Maybe. Art is subjective and so is individual taste in terms of what we think of a particular book (popular reviews, notwithstanding). I, too, am drawn to color, but I find that I tend not to enjoy character-driven covers. It's sort of like ... been there, done that, seen that a thousand times. I tend to like complexity. I'll pick King just because I only now saw the new cover for WIND IN THE KEYHOLE, but I like covers that make me have to pause and think . . . kind of like a fine piece of art.

Jordan, yes, I've been very fortunate.Ultimately, it's the publisher's decision, of course; they're the ones packaging the novel, after all. But something I found interesting was when I once suggested using a particular artist of whom I'm quite fond (and know very well). My editor said that a lot of publishing houses were moving away from art-art for covers. To be honest, I think that's because it's expensive. But let's be real: there's something amazingly compelling about knowing that the art you're seeing on your cover was created just for you. I was very fortunate to get to know the artist behind some of my MECHWARRIOR covers-they were digital compositions--and more grateful than you can imagine when he sent me beautiful prints. I could never create anything half that wonderful.

We all DO have covers on the brain. Without knowing what Ilsa was writing, I've got a post tomorrow that deconstructs dancegirl and Circle of Silence cover art. Personally, I love the ASHES cover. It'll be fun to see what everyone thinks about all this...coverage!

EEK! Ilsa, your covers are FAB! I have to say that UK version of Ashes is my favorite. There's something about the sepia that makes it both elegant and disturbing. What a fun post! Can't wait to share my first cover one day. :)