The Power of Books


Books are powerful. The books children read can shape their lives. I'm proof of that.

I’ve been thinking about the stories I read and loved when I was a child and a teenager – the ones that inspired my love of reading and made me want to be a writer. As an adult, I’m a pretty eclectic reader – I enjoy many different types of fiction. Looking back, I notice that was true for me as a child, as well. So here’s a short list of some of my childhood favorites: 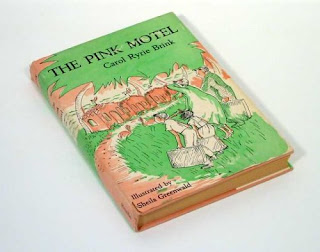 The Pink Motel by Carol Ryrie Brink. This was my favorite book during elementary school. I must’ve been in 4th grade when I read it the first time, and I’ve thought of it often over the years. I recently decided to search for a copy; I wasn’t sure why this particular story had meant so much to me that I’d never forgotten the title, and I wanted to read it again to find out. Honestly, I’d forgotten most of the plotline and the characters, but the joy of reading it was fresh in my mind, as was the breezy beach setting. (We always lived in landlocked parts of the country growing up, and I’m pretty sure this story played a big part in inspiring my lifelong fascination with the ocean and beaches.) The Pink Motel is out of print, but I was thrilled to find a used copy of the original PINK hardback version! Rereading the story as an adult, it’s clear to me what makes it so special. On the surface, The Pink Motel is a fun, quirky, adventurous mystery full of eccentric characters – the guests staying at the motel that Kirby and Bitsy Melon’s family inherits. But on a deeper level, it is a story about embracing differences in people and having an open mind. I think it “spoke” to me when I was a shy girl who moved a lot, because it seemed to say that unusual people who don’t fit in with everyone else are wonderful and interesting, and that there are places in our society where they can be accepted as they are. In this terrific book, one of those “places” is a pink motel where anything can happen. 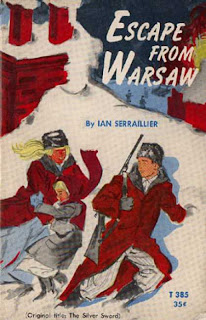 Escape From Warsaw by Ian Serrallier. I read this novel in 6th grade. I think it has stayed with me for so many years and inspired me as a reader and a writer because it made the horrors of war real to me by presenting them through the experiences of three children, ages twelve, eleven, and three. During World War II, their country of Poland has been invaded by the Nazis, their father thrown into a prison camp, and their mother arrested and transported to Germany. The children are left to fend for themselves, and when they hear that their father has escaped to Switzerland, they face many dangers to cross war-torn Europe on their own and try to find him. Escape from Warsaw gripped me, made my heart race, and made me look at the world in a different way.

As an older teen, I discovered The Great Gatsby by F. Scott Fitzgerald and realized for the first time the beauty and power of symbolism and imagery in fiction.  At the same time, I also discovered the classic ghost mystery and love story Rebecca by Daphne du Maurier. I loved the moody, dark tone of that novel, and I’m sure it’s the source of my own attempts to capture that “feel” in some of my own work. I also discovered romance novels during my late teens. I devoured the sweeping romantic historical sagas that launched that genre – Kathleen Woodiwiss’s The Flame and the Flower . . . The Wolf and the Dove – they are wonderful, breathtaking adventures – pure entertainment.

Another book I fell in love with as a teen is Go Ask Alice by Anonymous. At the time of its release, this was marketed as the true diary of a teenaged girl who became addicted to drugs and eventually died of an overdose. Since then, it has been rumored that the "true diary" story was really a marketing ploy by the publishers and that the story is fiction. Either way, the book had a real impact on me. I read it when I was sixteen after moving to a new city and I related to "Alice." In the story, she moves to a new town, too, and becomes friends with the "wrong" crowd, which leads to her experimentation with drugs. The fact that I believed I was reading the words of a girl who had actually lived made me think more deeply about the choices we make and how they affect us. For that reason alone, I reluctantly forgive the publishers for deceiving their teen readers, if it's true that is what they did. 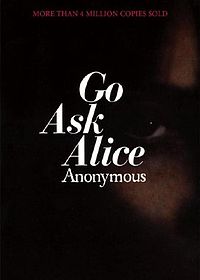 As I glance over this brief list, it’s interesting that some of the titles that stand out in my mind, especially the ones I read as a very young child, are not well-known. Yet they affected me so much that I still remember their stories decades later. It’s also interesting to note that all of these favorites hooked me as a reader for different reasons and influenced my writing, and my life, in varied ways: The Pink Motel made me realize that books can provide comfort and friendship during times of loneliness, and can teach lessons in subtle ways; Escape from Warsaw offered an example of how powerful and life-changing a well-told story can be; The Great Gatsby brought me an understanding of symbolism and imagery, and exemplified that if handled deftly, those elements add depth of meaning to a story; Rebecca proved that tone and atmosphere can set a desired mood and stir a reader’s emotions; The Flame and the Flower illustrated that fiction doesn’t always have to make a social statement or inspire a reader to consider life in a different way – sometimes it’s enough to simply provide a fun and entertaining escape from reality. And, finally, Go Ask Alice taught me that a writer's words can influence the choices readers make in their own lives.

What books from your childhood or teen years taught you something about life or, in some other way, made such an impression on you that you've never forgotten them?

Posted by Jennifer Archer at 1:30 AM

Wow. Book covers of your favs. Impressive, Jen. I became a big reader because of my love/ obsession over horses. I read anything in my elementary school library on them. I actually read EVERY book at one point. Mostly westerns & fantasy, but as I got older, I discovered crime fiction and became really hooked on all the subgenres. Robert Ludlum got me hooked on espionage thrillers, but it all started with horses.

With my first job, I bought my first horse. My family eventually owned 5 & that experience shaped my childhood. I don't own horses these days but I will always love them with a passion.

That's really interesting that horses led you to books instead of vice versa, Jordan! I am starting to realize that I have many horse-loving friends in my life! Adding you to the list...

This is such a fun post. Made me think about the books I loved as a child. A Wrinkle in Time stands out. Meg was such a strong girl character; her mom was a SCIENTIST! Wow. And then -- first book crush--Calvin. The opposite to Meg--sweet,understanding, patient! I loved how it started so real and then went so sci-fi!

Carol, A WRINKLE IN TIME was also one of my childhood favorites, and still is! In fact, re-reading it as an adult led to my decision to write a YA novel!

Such a wonderful nostalgic post, and I loved the photos, too. I love everything about old books...have made an adult hobby of collecting the ones I read over and over from the library when I was a young bookworm. I now have complete sets of Katie John, All of a Kind Family, Mary Poppins (all in original hardcover bindings)--and was thrilled to discover that the Beany Malone, Katie Rose, Toby & Midge, Pam & Penny series have all been reissued by Image Cascade. I bought them all. I was (and still am) a huge Little House buff. In later years, of course, I read "edgier" '70s YA by Judy Blume and Norma Klein.

What an awesome post, Jenny! I'm kind of in a time cruch today, or I'd give the HUGE long list of books I loved growing up. Here's the condensed version: Charlotte's Web, The Wind in the Willows, The Black Stallion series, Where the Red Fern Grows, To Kill a Mockingbird ... and I have a thousand more but should stop there before my comment becomes a post.

Wendy and Anita, you bring back some great reading memories with your lists!

I loved Great Gatsby growing up! I really do adore me some classics (as you can tell) Thanks for sharing these and your love for books!

Thanks for dropping by, Valia! I love the classics, too.