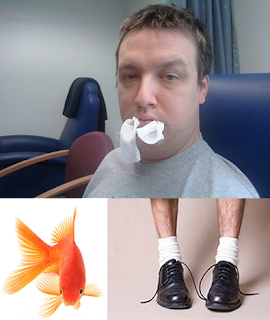 Are you wondering what those three pictures up there have to do with anything?

They represent visuals from two movies that gave me a lightbulb moment about characterization: How the most indelible details are the little things I notice about a character within the first few minutes they're on screen.

One movie was called Dark City. I saw it for the first time about a year ago. It's a psychological sci-fi horror from the director of The Crow, and a guilty pleasure for me for that reason alone. But I never expected it would actually teach me something about writing.

Here's the trailer. It's one of the best I've ever seen. Some of the visuals play a huge role in what this post is all about, so pay close attention:


When we first meet the hero, he's waking up in a bathtub full of tepid water. He's bleeding, and can't remember anything about his past. While getting out, he slips and shatters a fishbowl. As the goldfish lays on the floor gasping, the hero picks it up gently and releases it in the bathtub. He then turns around to find a woman's mutilated corpse beside his bed. So now he's on the run, thinking he's a cold-blooded murderer.

But wait ... how could someone who so tenderly saved the life of a fish, be heartless and violent? That one glimpse into his character already has us wondering.

Next, we meet the detective. One of the first things to come out of his mouth upon arriving at the crime scene is, "Your shoe's untied," to one of his officers. We immediately know he's fastidious and a man of details. He doesn't miss anything. So when he sees the bloody scene in the bedroom, then goes to the bathroom and finds the broken fish bowl and its previous occupant swimming merrily in the bathtub, he wonders the same thing we are. "Why would a murderer have the compassion to save a fish?"

That's amazing. The writers have given us bone deep insight into two characters with little more than a couple of afterthoughts and gestures. Because of the carefully laid out characterization within the first twenty minutes of the movie, we're  already starting to cheer for the possible murderer, and hoping the diligent detective of details will be able to figure out the truth and prove him innocent.


The other example is Ghost Town.


This one's a comedy about a dentist, who after being dead for a few minutes during a colonoscopy, is suddenly able to see and hear every ghost in town. Thing is, this guy HATES people and tries to avoid them at all costs. And how do we know this? Well, within the first few minutes of the movie, we find him stuffing a wad of guaze in his patient's mouth, not because he's about to do a procedure that requires it, but because he can't stand to hear her yak anymore. Heh.

Screenwriters are aces at honing in on what appears at first to be minutiae, then later comes into play in a big way. The story has to take front seat so the characterization needs to have super-powered details from the get-go. It's like giving us a jolt with an emotional spark plug so we're connected -- immediately and viscerally.

As novelists and story writers, we can take a lesson from this. Think of the first page of your book as a speed date. Those first few paragraphs are those crucial moments of dialogue between your character and your character's prospective date, the reader. You don't have long, so make the best of it ... make those details count.

In Splintered, my first two paragraphs spotlight something integral about the heroine in her own voice:


I’ve been collecting bugs since I was ten; it’s the only way I can stop their whispers. Sticking a pin through the gut of an insect shuts it up pretty quick.
Some of my victims line the walls in shadow boxes, while others get sorted into mason jars and placed on a bookshelf for later use. Crickets, beetles, spiders … bees and butterflies. I’m not picky. Once they get chatty, they’re fair game.
First, we know this girl has something mental going on. I mean, talking bugs? Eek! Second, we know that she's found a way to deal with it that works for her. So right off the bat, we can see she's got some issues, but she's proactive, and not going down without a fight. Hopefully, a reader would want to know more about a character like that.

Now look at the first few sentences / paragraphs in your latest project. Did you jump start your characterization with one small detail that packs a punch and gives your reader keen insight into your character's depths and individuality ... something that will make people want to read on?

The beginning of your story sets the groundwork for the relationship between your characters and your readers. If you want people to take your book off the shelf and out on a "second date," make sure to leave a big impression. Give them something worth pining for.
Posted by Anita Grace Howard at 4:00 AM

What a GREAT post, Anita! Wonderful examples too. I'll have to check out Dark City but Ghost Town is HILARIOUS. That was the first time I had seen Gervais & the scenes between him & Tea Leoni are priceless.

This is a prime example of SHOW don't TELL about your characters. I also have a thing that is movie oriented that I call the DEFINING SCENE where an author would introduce their msin character in an all-encompassing scene where the reader sees in an instant who the character is, like Johnny Depp as Capt Jack Sparrow in Pirates of the Carribean. He doesn't walk on and deliver his lines. His appearance takes center stage & is more about him than the plot.

Thanks for your insight. Great stuff.

OOoh AWESOME post! This makes me want to check all my manuscripts. lol

Now I remember that post; it's one of my favorites :o) Thanks for reposting it on here--definitely worth a second a read ;o) BTW, you opening of Splintered gave me the chills!! EEK! Can't wait to read it!

Blake Snyder referred to that moment as "save the cat" and talks about it in his screenwriting books (of the same name) which I thought were a really interesting read. Though writing for the screen and page are different, I think there's a lot of things that can be learned from and applied to both.

Yes I love it! Finding those moments where you can show more about your character than ten pages could tell is hard - but it's the right way to do it.

Jordan~ Thanks! You'll have to show us your Defining Scene post ... I would eat that up!

Jessie~ You MUST see Dark City! I'll warn you, though. It's VERY weird. That's why I loved it so much. ;)

Angela~ Hey cutie! Thank you for dropping by, and for your awesome enthusiasm for Splintered! :)

Kathleen~ Hi! Thank you! I agree totally. There's so much a novelist can learn from screenwriters, and vice versa.

Jenny~ LOL. You're such a great ego-booster. :)

Mindy~ Not the leaset bit surprised that you feel that way. Which is reason number kajillion why I can't wait to read your book!

Geesh! I've read those opening paragraphs more than a few times and I still giggle. EVERY TIME! You have captured the essence of Alyssa so well so quickly.

Jordan's comment was perfect: ..."Show don't tell..." which is something all of us writers need to remember. This post will surely help us to do that. Well done!

Oh twink, this is only a smidgen of what makes you so freaking awesome. What great insight into the good old' show vs. tell and rockin' characterization.

Also, the first two paragraphs of SPLINTERED are swoon-worthy. Thanks for a great post!

Really good post!It's those little things that matter so much. And I'm totally creeped out (in a good way) by those paragraphs!

Katey~ Thank you! And seriously, after reading your novel, I can say this with conviction: You have NAILED show don't tell. Heh. ;) Thanks for stopping by!

Kerrie~ Twinkster, I can't WAIT for you to get to read the whole book! Thanks for coming by and showing support! I'll be by your blog sometime this week...

Carol~ It's so funny you'd say that! I originally titled this post "the little things". Great minds and all that rot, right? ;) Thank you for the kudos on the excerpt!

The visuals from DARK CITY are so haunting; I remember that film well. Films and screenwriting in general often teach me a lot about writing.

Love your excerpt/example from SPLINTERED, too.

Thank you, Sarah! So nice to see you out and about in the blogasphere. I know you've very busy! ;)

Your phrasing about collecting bugs being "only way to stop their whispers" is haunting. Nice, lyrical prose. Also, Dark City sounds worth seeing.

Catherine, Dark City is incredible. It's one of those underrated masterpieces. You need to see it! And thanks so much for the compliment about my prose!

Awesome, Anita! Now I reeeeally want to read your book. Your character sounds quirky and rather hilarious.

We actually own Dark City; it's fascinating and creepy. Shell Beach...