Today is Valentine’s Day. First of all--Happy V Day to you all. I hope you get lots of chocolate, flowers, jewelry…and books! (I’ve spent many a Valentine’s Day curled up, alone, with a good novel—but that’s a whole ‘nother story!)

For me, V-Day came five days early this year. February 9th to be exact. That’s the day my publishing company, Harlequin Teen, chose to reveal the cover for my next book. 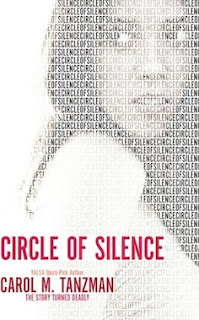 As Ilsa coincidentally discussed yesterday, (this seems to be cover week on ADR3NALIN3) seeing the art design for your book is one of the most exciting days a writer can have. We spend so many hours alone: writing, imagining scenes, characters, settings, and the plot. We struggle, we try every trick we can think of to solve the problems that come up in the manuscript. And yes, we also spend fun time trying to visualize the book cover. We're just like musicians. Ask any band member what their first (or second) album cover will look like—and immediately they’ll go into a monologue with pretty much every detail sketched out.

Getting a book cover right is tricky. Even though we shouldn’t judge a book by its cover, secretly, many of us do. Both Circle of Silence and dancergirl are contemporary thrillers—so it’s especially challenging to nail them. Paranormals, horror, romance—we all sort of know what they should look like. Not specifically, of course, since each book is different, but generally. If you see a romance novel, with it’s gorgeous girl or hot guy, you know what to expect. When you look at a paranormal, either a traditional ghost story or the truly dark, twisted kind, you know what you’re in for. Check out the covers by the authors on the bottom of this blog (and Ilsa's post yesterday) and it’s clear we’re not writing warm and fuzzy. Still, there are differences—and they are subtly reflected by the cover art.

Authors do not design covers. To many readers’ surprise, they may have little, or no input. However, Harlequin Teen showed me various drafts of the covers and my comments were always welcome. This is something authors definitely appreciate.

For dancergirl, the challenge the Harlequin Teen design team had was to take a teenage heroine who loves to dance and give the reader the sense that something scary is happening. It’s two contrasting themes in the book––and figuring out a way to incorporate them both had to have been a challenge. 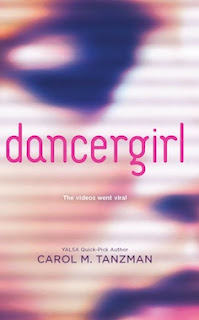 Let’s look at the elements. The book designers added the tagline “The videos went viral” to locate the book in the contemporary world. Then they used an extreme close-up image of a girl and cropped it so that it’s asymmetrical. That alone is somewhat disturbing. She looks….upset? Concerned? Distraught? The viewer doesn’t know precisely—but what we do know is that this is not a happy camper. Over this image, lines are superimposed. Low-resolution video lines? Open venetian blinds, as if someone’s staring at her from outside her window? The sophisticated technique leaves it open to interpretation. As the writer, I love that!

The title is hot pink, which by itself doesn’t read as creepy. Yet deep purple shadows under the girl’s eyes and on her lips undercuts any notion of a carefree dancergirl. Overall impression: something disturbing is going on to someone who does not deserve it. It’s a lot of information to convey, and the design team nailed it.

Now for my early, and fab, Valentine’s Day present: the Circle of Silence cover. Oh, yes, Art Director Erin Craig and Designer Tara Scarcello know the way into this girl’s heart! Different than dancergirl, yet somehow tied to it. Exactly the way the books are. Each a stand-alone, yet both take place in the same high school with appearances by various characters in both books.

Again, I’ll start my personal deconstruction with the tagline. “The story turned deadly.” The main character is a reporter on the Campus News team—and the line clearly hints at that. It also tells the reader that this story is going to get very tense, very fast.

The image of the girl is not in as extreme close-up as with dancergirl. In this case, the expression on her face, and the way she looks over her shoulder, is what tells the viewer that she is worried. Concerned. Creeped out. Who, or what, is behind her? That’s the question we ask as we look at the cover. It’s also the biggest mystery in the book. Literally, who is behind the events at school that keep turning ever more sinister?

Instead of lines superimposed over the face, this image is actually made of letters…the title of the book, over and over and over again. Circle of Silence. Who is in this secret circle? Who is not? The questions haunt Valerie, the main character. Over the course of the book, certain events also loop obsessively in her mind—just like the title. Once you read the novel, you'll understand why this visual representation is both so compelling and so brilliant!

One last note: the title color. It’s in the pink family. Almost the same as what's used on the dancergirl title––but not quite. It’s a little darker, which just may signify that Circle of Silence is also a little darker, a little creepier.

It’s obvious that I’m thrilled with the cover design. It’s sophisticated. It has resonance to the book in both literal and metaphoric ways. And yes, just like the first book, it’s very, very cool. Thank you so much, Erin and Tara for making my (early Valentine’s) Day!

What do you think about the covers? Or my deconstruction of them...
Posted by Carol Tanzman at 3:30 PM

Great covers for both, Carol! I do love this new one. It totally fits the genre and *your* voice. Kudos~